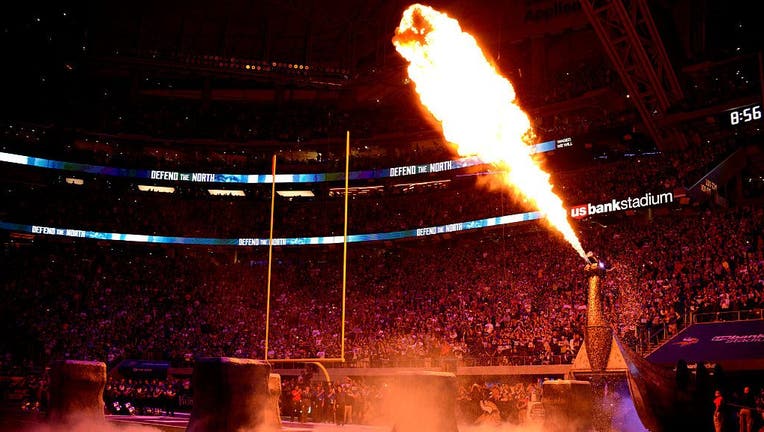 MINNEAPOLIS, MN - OCTOBER 3: A flame shoots out as the Minnesota Vikings take the field before their game against the New York Giants on October 3, 2016 at US Bank Stadium in Minneapolis, Minnesota. (Photo by Hannah Foslien/Getty Images) (Getty Images)

MINNEAPOLIS (KMSP) - It’s up to Dalvin Cook and his Minnesota Vikings teammates to provide the fireworks on the field at U.S. Bank Stadium this weekend. Following a pyrotechnics malfunction and fire at the Tennessee Titans game in Week 2, the NFL has placed a “temporary moratorium on all flame effects and pyrotechnics that typically take place on the field during games.”

That means Vikings fans won’t see the fire-breathing dragon or pillars of flames when players rush onto the field for Sunday’s game against the Oakland Raiders. According to the Vikings, the moratorium will not impact pyrotechnics used off the field, such as along the roof of U.S. Bank Stadium.

The Vikings released the following statement:

“Following a pyrotechnics device malfunction during an NFL pregame ceremony last week, the NFL has placed a temporary moratorium on all flame effects and pyrotechnics that typically take place on the field during games. The moratorium, which will remain in effect as the league reviews the matter, will impact the Vikings pregame entertainment elements this Sunday. While the team continues to explore other special effects options, fans heading to the game against the Raiders will notice changes. The moratorium will not impact pyrotechnics used off the field (i.e. along the roof of U.S. Bank Stadium).”

During last Sunday’s game between the Tennessee Titans and Indianapolis Colts, one of the pyrotechnics machines used during player introductions caught on fire when the flames shot out horizontally instead of vertically.

Event staff at Nissan Stadium used fire extinguishers to put out the fire and the corner of the stadium was evacuated. There were no injuries.