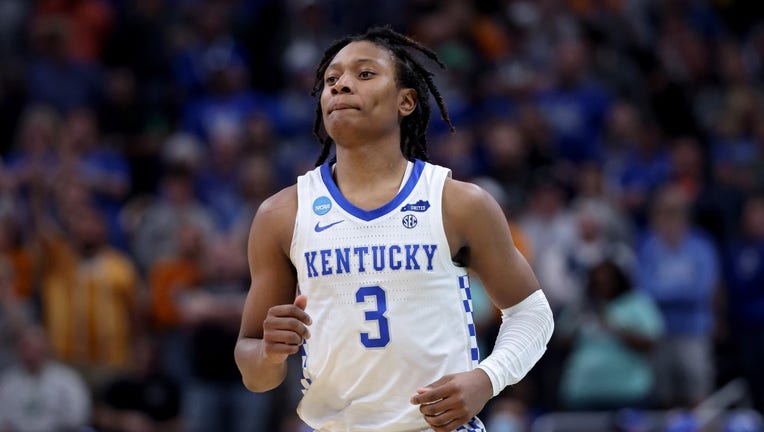 TyTy Washington Jr. #3 of the Kentucky Wildcats jogs across the court in overtime against the Saint Peter's Peacocks during the first round of the 2022 NCAA Men's Basketball Tournament at Gainbridge Fieldhouse on March 17, 2022 in Indianapolis, India ((Photo by Dylan Buell/Getty Images))

MINNEAPOLIS - The NBA Draft is Thursday night, and for the first time in recent memory, the Minnesota Timberwolves do not possess a lottery pick.

The Timberwolves, following a 46-36 season and first round loss to the Memphis Grizzlies in the Western Conference Playoffs, currently have the No. 19 pick in the first round. It’s the first big decision for a new front office, led by Tim Connelly.

The Timberwolves also have three second round picks at Nos. 40, 48 and 50.

There will be plenty of Minnesota flavor Thursday night, aside from the Timberwolves. Chet Holmgren is a consensus top-two selection, Kendall Brown should be a first round pick and David Roddy is likely a second round pick. Holmgren, Auburn’s Jabari Smith and Duke’s Paolo Banchero are the consensus top-three selections.

So who could the Timberwolves pick at No. 19? Here are five names to watch:

TyTy Washington declared for the NBA Draft after one season at Kentucky, and the guard averaged 12.5 points and 3.9 assists per game. With some uncertainty surrounding D’Angelo Russell’s future in Minnesota, Washington could be an option. He would have the Kentucky connection with Karl-Anthony Towns, and would be among a Wildcats’ group of guards in the NBA that includes Devin Booker, Jamal Murray and De’Aaron Fox.

Washington was a Second Team All-SEC pick and the No. 14-ranked player in the country coming out of high school last year.

Blake Wesley is a 6-5, 185-pound guard who spent one season at Notre Dame. He averaged 14.4 points, 3.7 rebounds and 2.4 assists per game as a freshman. He was a Second Team All-ACC pick and is the first player from the Irish program to leave for the NBA Draft after just one season. He had eight games with at least 20 points, and would be another option if Russell has a short future in Minnesota.

Not to be confused with Denver Nuggets star Nikola Jokic, Jovic has a very similar game to that of the two-time MVP. At 6-10, 205 pounds, Jovic averaged 10.7 points and 4.4 rebounds per game in Serbia last season. Scouts left his Pro Day in Chicago impressed after he hit 10 straight 3-pointers from a baseline corner. You can never have enough shooters, and Jovic would give them a forward with length who can shoot.

Walker Kessler is a 7-1, 245-pound center who played one season at North Carolina before transferring to Auburn last year. Kessler averaged 11.4 points, 8.1 rebounds and 4.6 blocks per game for the Tigers last season. He was voted the National Defensive Player of the Year, Third Team All-America and was one of five finalists for the Kareem Abdul Jabbar Center of the Year honor after leading the country in blocks. He’d give the Timberwolves an option at center, which would give Towns position flexibility.

If the name sounds familiar, E.J. Liddell gave the Gophers match-up problems in the Big Ten. The former Ohio State star averaged 19.4 points, 7.9 rebounds and 2.6 blocks per game. In 92 career games with the Buckeyes, Liddell averaged 14.1 points and 6.1 rebounds. He was a Third Team All-America selection and improved his perimeter play last season, shooting 37.4 percent from three-point range.

At 6-7 and 240 pounds, Liddle could give the Timberwolves another physical and dynamic presence at forward.