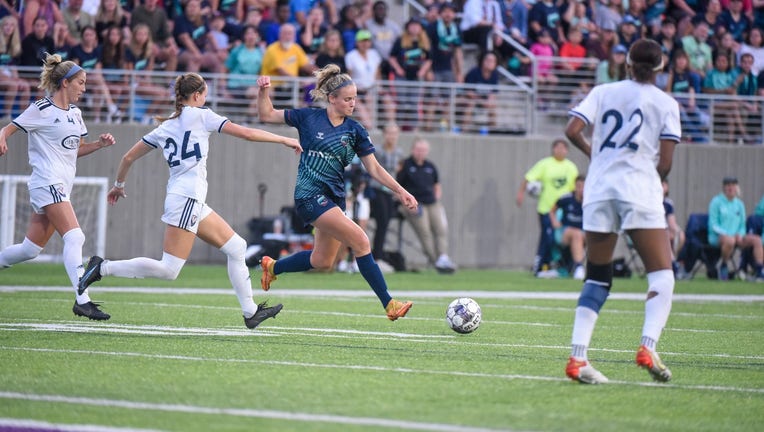 MINNEAPOLIS - After finishing second in its inaugural season in the USL W, Minnesota Aurora FC is sending its first player off to the professional ranks.

Team officials announced on Sunday that top scorer Morgan Turner has signed a pro contract with SCU Torreense of Portugal, which plays in Liga BPI. The Maple Grove native will make her pro debut Aug. 28 against Clube Atletico Ouriense for the League Cup.

A historic inaugural season for Minnesota Aurora FC ended Saturday night in a 2-1 loss in extra time to Tormenta FC in front of a sellout crowd at TCO Stadium.

The team got its start in 1917 and is based in Torres Vedras, Portugal. They carry the motto, "Orgulho do oeste" which translates to "Pride of the West."

"Playing professionally is a dream come true for me, so I couldn’t be more excited to play for Torreense this season," Turner said.

Turner was a key piece of Minnesota Aurora FC’s inaugural season in pre-professional soccer. She played in eight regular season matches, and all three of the team’s playoff games. In 635 minutes played, she scored eight goals and had 16 total points.

Minnesota Aurora FC coach Nicole Lukic, the USL W Coach of the Year in her first season, hinted there would be at least one player signing a professional contract after the season. Turner becomes the first to do so.

"Playing for Aurora this summer prepared me to play professionally. I competed at a high level in practice every day with my teammates and we played against strong teams in our division and in playoffs," Turner said. "The coaches also helped me to improve by continuing to develop me as a player and teaching me more about the game in a variety of ways."

Minnesota Aurora FC went 13-1-1 in its inaugural season, with its only loss coming in the USL W title game against South Georgia Tormenta FC. Turner had a chance for the potential game-winning goal in that match, but her penalty kick in extra time was saved. Minnesota Aurora FC entered the championship match on a 13-game win streak.

Now, the Minnesota native and former DePaul standout is taking her talents to Portugal.

"Playing in Portugal will allow me to learn from the different perspectives of my coaches and teammates and also teach me about different styles of soccer, and I’m excited to become a better player and coach from this experience," Turner said.