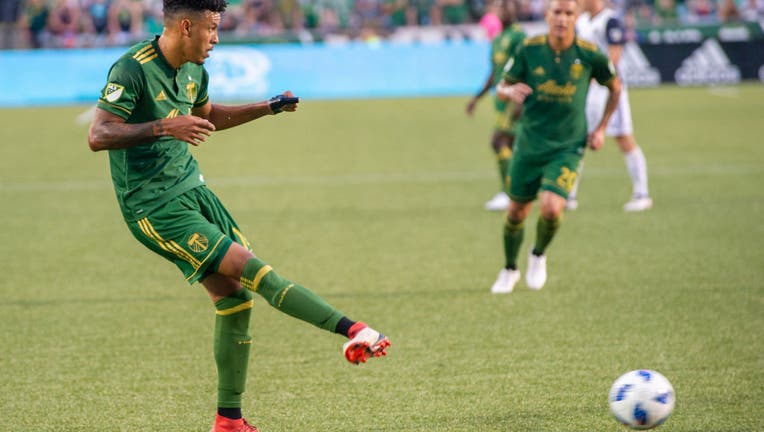 FILE - Portland Timbers defender Julio Cascante during the Portland Timbers victory over the Philadelphia Union On Aug. 4, 2018, at Providence Park in Portland. (Photo by Diego Diaz/Icon Sportswire via Getty Images))

The MLS Is Back Tournament rolls into the semifinal round with a very unexpected final four teams, and that’s exactly how it should be. Not because last year’s finalists or the “big” clubs in MLS couldn’t or shouldn’t have extended their stay in the Orlando bubble into August, but because the uniqueness of this situation—a compressed schedule, games without fans, early and late kickoff times to deal with the heat and humidity of the Central Florida summer—provided an opportunity for a more level playing field, and a chance for teams that were motivated to really prove something to themselves, their fans, and the rest of the league.

Certainly we’ve seen that with a few teams that have already been knocked out: Cincinnati have come to life under new coach Jaap Stam; San Jose are riding a belief and confidence after last season’s late collapse; New York City showed more of an edge and a bite to their play than we’ve seen much of before. But, it’s down to four others, and each has a unique reason why they’ve come this far, and what winning the MLS Is Back Tournament would mean; besides the CONCACAF Champions League berth and the prize money.

The Union have become the darlings of the MLS world during this tournament: led by likeable coach Jim Curtin, big personalities who aren’t afraid to use their voice in the world at large like captain Alejandro Bedoya, and young American stars like Brendan Aaronson and Mark McKenzie. In truth, what we’re really seeing is the first fruits of a process that has been going on for a while now: Curtin being hired in 2014, a front office shake-up in 2015, their first homegrown players coming into the team in 2018. Now, in Curtin’s words, it’s about providing to their ownership group (which now includes NBA star Kevin Durant) a “proof of concept” that their investment is paying dividends, either by selling a player to a European club or winning a trophy, both of which could be accomplished in the next few weeks.

As for Portland, they had their home city won over and filling their stadium before they were even in MLS, and they’ve been to MLS Cup twice in the last five years, winning in 2015. So what do they have to prove? After losing to Atlanta in the 2018 final, there was a hope that it would mark an era of no more ups-and-downs, but becoming consistent contenders; suffice to say, 2019 unraveled on them in a variety of ways and for a variety of reasons, and left a bitter taste in everyone’s mouth. They restocked and reloaded in both attack and defense, the stars they’ve had for years—Diego Chara, Diego Valeri, Sebastian Blanco—are still playing like stars, Jeremy Ebobisse has emerged as a goalscoring force, and they look like the team that was unbeatable in the second half of 2018.

So, will Philadelphia take the next step on their journey towards a first ever trophy? Or will Portland show everyone that they’re back among the MLS elite?

The “hosts” of this tournament have used it exactly as they hoped: having never made the playoffs since joining the league, and on their fourth head coach in those six seasons, Orlando finally look like they’re reaching the potential their ownership, and fan base, deserves. Why? It’s easy to point to legendary star Nani, young American winger Chris Mueller, or one of the best signings this offseason, Peru national team goalkeeper Pedro Gallese. In reality, it’s all about coach Oscar Pareja: an infectious personality, a master motivator, a believer in young players, he’s done this for Colorado and Dallas already in years past, and has the Lions roaring into the semifinal.

But, speaking of infectious personalities and master motivators, that brings us to Minnesota coach Adrian Heath. Who was, from 2011 to 2016, Orlando coach Adrian Heath. And, for that matter, Minnesota midfielder Kevin Molino, who was once known as Orlando’s two-time USL MVP Kevin Molino. So, you can talk about how the Loons took a huge step forward last year, making the playoffs for the first time, finding a fascinating nucleus of MLS veterans, young Americans, and foreign journeyman, and how they’ve used the MLS Is Back Tournament to ratify their 2019 success, all banded together as their coach trumpets the “no one believes in us” mantra.

Or, you can just say this: it’s “new” Orlando, vs “old” Orlando, playing for a title shot in Orlando. What more motivation do you need?