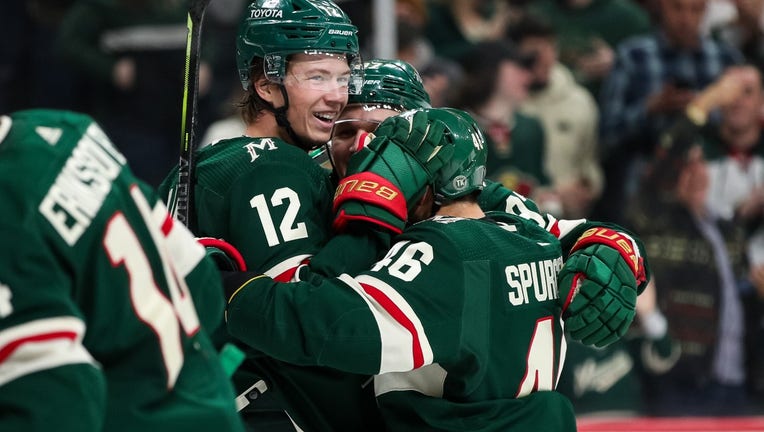 Matt Boldy #12 of the Minnesota Wild celebrates with teammates after scoring a power play goal against the Detroit Red Wings for his first career NHL hat-trick in the second period of the game at Xcel Energy Center on February 14, 2022 in St Paul, Mi ((Photo by David Berding/Getty Images))

MINNEAPOLIS - The Minnesota Wild clinched a spot in the Stanley Cup Playoffs for the ninth time in 10 seasons after beating the San Jose Sharks 5-4 in overtime Sunday night.

We’re entering largely uncharted waters when it comes to Minnesota’s winter professional teams in the playoffs. For the first time since 2018, the Wild and Timberwolves are in the playoffs at the same time. It’s also just the second time since 2003, 19 years, that both teams put themselves in the postseason.

Longtime Timberwolves fans were happy to see their team back in the playoffs and shrugged off criticism from national media, saying, "They hate us because they ain't us."

CAN THE WILD FINALLY GO ON A PLAYOFF RUN?

Being in the playoffs is nothing new for the Wild. But they haven’t been able to do much with the opportunity once they’ve gotten there. The Wild hasn’t won a playoff series since the 2014-15 season, when they beat the St. Louis Blues in six games to open the Western Conference Playoffs. That run ended abruptly, losing in four games to the Chicago Blackhawks.

The Wild lost in seven games last year to the Vegas Golden Knights. Two years ago, they lost a qualifying playoff to the Vancouver Canucks in season altered by the COVID-19 pandemic. The Wild has also lost in the first round to the Dallas Stars, St. Louis Blues and Winnipeg Jets.

The last time the Wild made the Western Conference Finals? It was 2003, a 4-0 loss to the Anaheim Mighty Ducks.

WHAT WILL THE TIMBERWOLVES DO WITH THEIR OPPORTUNITY?

The Timberwolves beat the L.A. Clippers to earn the No. 7 seed for the Western Conference Playoffs, and celebrated by drinking Bud Light, jumping on the scorer’s table and showing each other with water. They received national and even some local criticism for throwing that party. They were told "act like you’ve been there before."

There’s only one problem with that: They haven’t been there before. It’s Minnesota’s first playoff appearance since the 2017-18 season, a team that weathered a toxic storm with Jimmy Butler and Tom Thibodeau. This year marks just the second trip to the postseason for the franchise since Kevin Garnett led the 2003-04 Timberwolves to the Western Conference Finals.

The Timberwolves earned their playoff spot by beating the Clippers, then earned some national respect by winning Game 1 at Memphis, 130-117. Led by Anthony Edwards and Karl-Anthony Towns, they didn’t look scared. They weren’t timid, they answered every run the Grizzlies made, and pulled away in the fourth quarter.

It’s something Timberwolves’ fans simply haven’t seen in 19 years. As the No. 7 seed, the path to winning a playoff series involves winning at least one road game. The Timberwolves did just that on Saturday. Now, can they get greedy and win another one at Memphis Tuesday night?

The Timberwolves will be back home Thursday night, and if the play-in game is any indication, the atmosphere at Target Center will rival the home games in the Garnett playoff days.

It’s fun to have Minnesota’s winter professional sports be relevant again in the postseason. Now, let’s see how far they can take it.