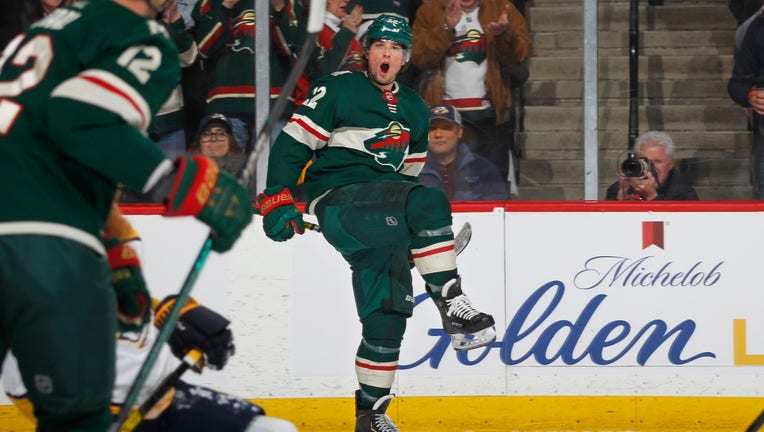 Kevin Fiala #22 of the Minnesota Wild celebrates after scoring a goal against the Nashville Predators during the game at the Xcel Energy Center on March 3, 2020 in Saint Paul, Minnesota. ((Photo by Bruce Kluckhohn/NHLI via Getty Images))

MINNEAPOLIS - The Minnesota Wild could be back on the ice training at TRIA Rink in St. Paul on Monday.

The NHL announced Thursday it’s entering Phase 2 of its return-to-play plan, starting next Monday. Provided all NHL teams have a practice plan that stays within Coronavirus guidelines, the can open training facilities to players for individual on and off-the-ice training. Players can also participate in small-group sessions, not exceeding six players at a time and a limited number of club staff.

All workouts are voluntary, and the measures set out are intended to give players a safe and controlled environment to resume hockey conditioning.

The NHL suspended its season on March 12 due to the Covid-19 pandemic. The Wild were 7-3 in their last 10 games at the time, and were one point out of a playoff spot with 13 regular season games to play.

On May 26, Commissioner Gary Bettman announced the NHL regular season is effectively over, and play will resume with a 24-team tournament to determine the Stanley Cup champion. The top four teams in each conference will play a round robin for playoff seeding, and the remaining eight teams will face each other in play-in series. That means the Wild will face the Vancouver Canucks in a best-of-five series, with the winter advancing to the playoffs. The Wild will be the home team for Games 3 and 4.

“Nothing is ever going to be perfect and make everybody happy, but I think they’ve come up with something that I think most people are going to agree with. Hockey is going to be back in the near future and I’m really excited about it,” Wild General Manager Bill Guerin said recently.

The St. Louis Blues, Colorado Avalanche, Vegas Golden Knights and Dallas Stars were the top four teams in the West when play stopped. They will receive byes to the playoffs, and will play each other in a round robin to determine seeding.

The NHL announced Thursday all series after the play-in round will be best-of-seven.

League officials said training camps are part of the NHL’s plan in Phase 3. They won’t begin before July 10. The NHL hasn’t announced when games might start, and they haven’t announced where they will be played. Each conference will have one hub city where all games are played, and Minneapolis-St. Paul is one of the hubs under consideration. The NHL will announce those sites at a later date.

The NLHL also hasn’t made an announcement on fans in arenas, though it’s unlikely that it’s feasible due to Covid-19 concerns. Guerin said when it comes to the playoffs, he doesn’t expect a drop-off in play.

“When that puck drops, there’s something inside of these athletes that just the switch flips. They’re so competitive and they want to win so bad that they’re just going to play and it’s going to be as competitive as ever. I’m very confident in that,” Guerin said.