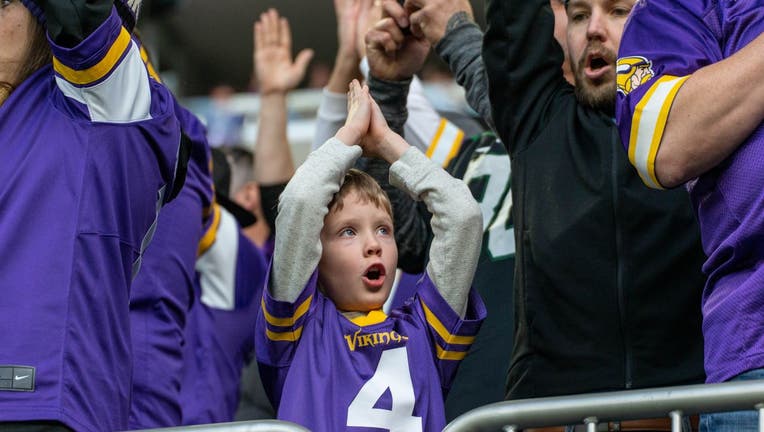 Minnesota Vikings fan does the Skol Chant during the NFL game between the New York Jets and the Minnesota Vikings on December 4th, 2022, at U.S. Bank Stadium, in Minneapolis, MN. (Photo by Bailey Hillesheim/Icon Sportswire via Getty Images)

BLOOMINGTON, Minn. (FOX 9) - To kick off Wild Card Weekend, the Minnesota Vikings are hosting a Purple Friday fan rally at the Mall of America on Friday.

The event in the Rotunda at the Bloomington megamall will be held from 5-7 p.m., during which FOX 9 will be doing Vikings Live: Wild Card Week live from the rally from 6:30-7 p.m. (you can watch it on FOX 9 and streaming on FOX9.com and on FOX 9's YouTube channel).

Fans are invited to join in on the fun with performances from the Minnesota Vikings cheerleaders and the SKOL Line, autographs from Vikings legends, tailgate games, photo opportunities, and more.

Paul Allen, the voice of the Minnesota Vikings, will host the event, with guest appearances from Vikings Entertainment Network talent, Gabe Henderson and Tatum Everett.

Behind the scenes: Preview of Showtime! documentary to premiere on FOX 9

On game day, the Minnesota Vikings and their fans are focused on the play between the lines. But, in places you never see, there's another massive amount of teamwork. From the Minnesota Vikings Cheerleaders to the SKOL line, to the production team there are more than 200 people that bring a Vikings home game to life.