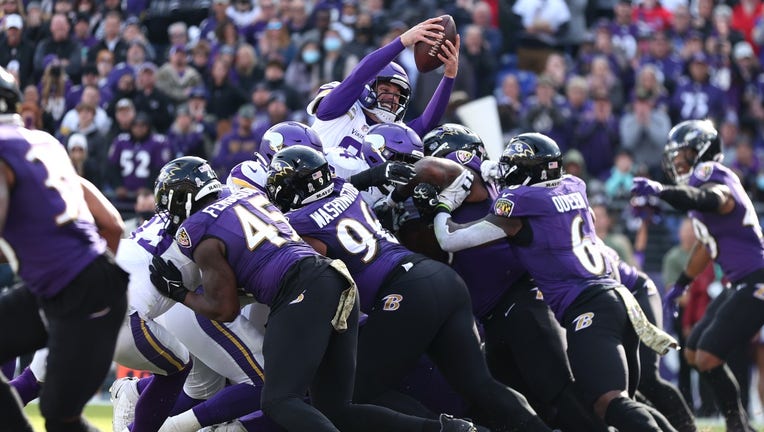 Quarterback Kirk Cousins #8 of the Minnesota Vikings leaps over the pile to score a second quarter touchdown against the Baltimore Ravens at M&T Bank Stadium on November 07, 2021 in Baltimore, Maryland.  ((Photo by Scott Taetsch/Getty Images))

MINNEAPOLIS - A 14-point second half lead wasn't enough for the Minnesota Vikings in a 34-31 loss in overtime to the Baltimore Ravens on Sunday at M&T Bank Stadium.

The Vikings fell to 3-5 on the season, and have lost two straight since fighting to get back to .500 entering their bye week. Three of their four road games this season have gone to overtime, and the fourth was a walk-off loss on a missed field goal at Arizona. The Vikings have had seven of their eight games this season come down to one possession.

The Vikings’ defense simply got tired Sunday, being on the field for 89 plays and more than 46 minutes, with the offense unable to sustain a drive for nearly three quarters after scoring touchdowns on their first two possessions. Kene Nwangwu opened the second half with a 98-yard kickoff return for a touchdown and 24-10 Vikings' lead, but the Ravens answered with 21 straight points, with two of the three drives going more than six minutes.

Trailing 31-24 late in the fourth quarter, Kirk Cousins led a game-tying touchdown drive for the Vikings that ended with a 1-yard score to Adam Thielen. It forced overtime, despite Mike Zimmer resisting his temptation to go for a two-point conversion and the lead. Anthony Barr intercepted Lamar Jackson on the first series of overtime, but the Vikings’ offense did nothing with it. Cousins hit Dalvin Cook for two yards, a Cook 2nd-and-long run went for a loss and Cousins had a pass intended for Thielen fall incomplete before punting.

Baltimore got the win on Justin Tucker’s 36-yard field goal with 16 seconds left.

"Disappointing loss. I thought we played hard, I thought we fought. We had some guys step in for other guys, but we didn’t play good enough to win," Zimmer said after the loss. "We had a chance to put the game away after the turnover. We didn’t do good there, and then we haven’t been good in the two-minute drill on defense."

The Ravens finished with 500 total yards, 247 on the ground and doubled the time of possession against the Vikings, 46-23. They also finished with 36 first downs to Minnesota’s 13, and were 3-for-3 on fourth down conversions. The Ravens ran 89 offensive plays to Minnesota's 52. The Vikings committed eight penalties for 107 yards, including two defensive flags that led to 10 Baltimore points.

Lamar Jackson led the Ravens with 266 passing yards and three touchdowns, and was also the Ravens’ leading rusher with 21 carries for 120 yards. Le'Veon Bell and Devonta Freeman had 14 carries combined for 127 yards and a score.

The Vikings led 14-3 after Cousins hit Justin Jefferson for a 50-yard touchdown, then took a 1-yard plunge himself early in the second quarter. They had a chance for more points before the half after Cam Bynum made a diving interception on Jackson, but lost one yard on three plays and had to settle for a Greg Joseph field goal.

The Ravens answered with a 5-yard touchdown from Jackson to Freeman to cut Minnesota’s lead to 17-10 at the half. It was set up after Xavier Woods was flagged for pass interference on a deep pass, a flag Eric Kendricks called "ridiculous" after the game. It continues a disturbing trend this season of the Vikings giving up points in the final two minutes of the first half.

Offensive inconsistency has also been an issue for the Vikings most of the season. Last week, they managed just three field goals after an opening drive touchdown. Sunday? The Vikings had five drives after their first two scores that went 23 plays for a combined 45 yards, and the offense didn't cross midfield. They resulted in four punts and a field goal.

Jackson hit Patrick Ricard for a 1-yard touchdown to get the Ravens within 24-17 in the third quarter. Jackson then capped an 18-play, 10-minute drive with a game-tying 5-yard touchdown to Devin Duvernay. The Vikings' offense immediately went 3-and-out, putting an already tired defense right back out on the field. The Ravens took their first lead at 31-24 with 3:29 to play on Le’Veon Bell’s 1-yard touchdown run.

Zimmer prides himself on stopping the run. The Ravens ran for 247 yards Sunday, averaging 5.5 yards per carry.

The Vikings were without several defensive veterans in Sunday’s loss. Danielle Hunter is out for the season with a torn pectoral muscle, Patrick Peterson is out at least one more game with a hamstring injury and Michael Pierce is still dealing with a bad elbow. Complicating matters in the secondary, Harrison Smith was placed on the reserve/COVID-19 list Sunday morning.

They were also without center Garrett Bradbury due to COVID-19 protocols. Cousins finished 17-of-28 for 187 yards and two touchdowns, and Dalvin Cook had 17 carries for 110 yards. Jefferson and Thielen, Minnesota's top two receivers, had a combined five catches for 75 yards and two scores on 12 targets.

The Vikings needed 16 plays to total 173 yards and two touchdowns in their first two series. The rest of the game? They ran 36 offensive plays for 145 yards, and 10 points.

"We've got to win a football game," Cook said of the Vikings' offense.

The Vikings stay on the road to face the L.A. Chargers next week.