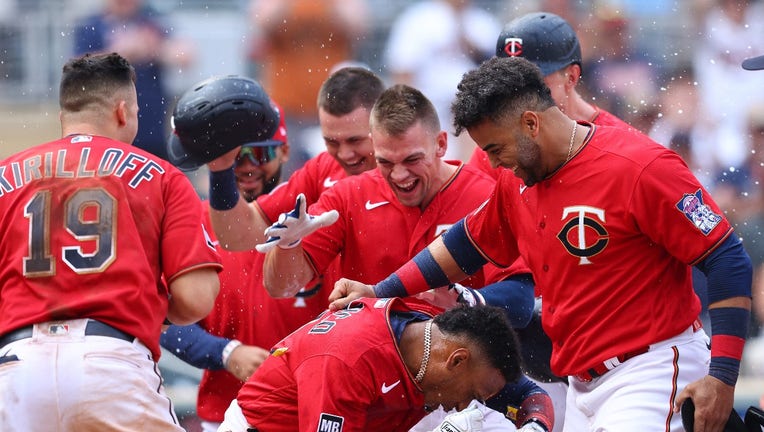 MINNEAPOLIS - The Minnesota Twins finished the first half of a disappointing start to the 2021 season with a 12-9, walk-off win over the Detroit Tigers on Sunday at Target Field.

Jorge Polanco launched a fast ball into the left field bleachers in the bottom of the 10th, and was mobbed at home plate by his teammates as the Twins finished off a four-game sweep of the Tigers. The Twins are 89 games into the season, and they’re 39-50. A team coming off its second straight American League Central Division title under Rocco Baldelli is 15 games out of the division lead, and 11.5 games out of a Wild Card spot.

The Twins won their fifth straight extra-inning game on Sunday, after starting the season 0-8 in games that went past nine innings.

For now, the Twins are going into the break with good vibes, having won four in a row.

"You don’t normally or all the time get to go into the All-Star break on such a high note. I think it’s a great way for our guys to spend the next four days really letting that continue to build and to think about the positive nature of the way we’re playing right now. Then come back ready to go," Twins manager Rocco Baldelli said after the win.

There are 73 regular season games left, and the Twins have a lot of catching up to do if they intend to be part of the postseason. The season is at a crossroads, with the Major League Baseball trade deadline about two weeks away.

Will the Twins trade veteran players to contending teams? Or will they try to keep the roster intact, wait for key players to get healthy and try to fight their way back after a slow start?

We’ll find out within the next few weeks, with rumors floating that Nelson Cruz, Taylor Rogers and Josh Donaldson could be dealt for future assets. The Twins have won six of their past eight games, yet are still 11 games below .500. We’ll know soon where the franchise wants to take the 2021 season.