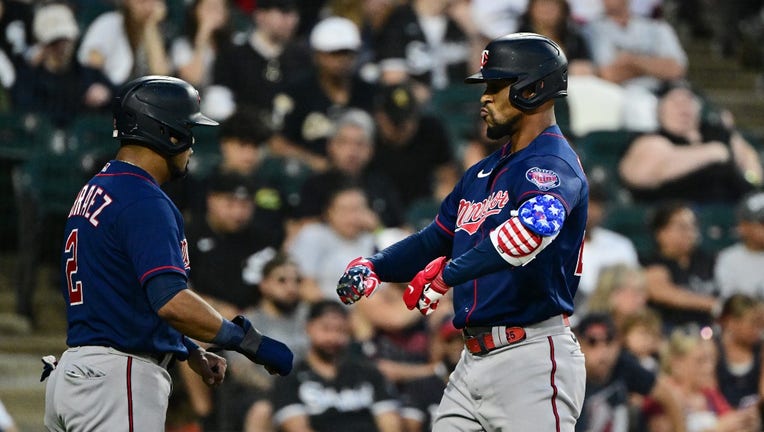 MINNEAPOLIS - The Minnesota Twins have a 4.5-game lead on the Cleveland Guardians in the American League Central Division, and they’ll be sending at least two players to next week’s mid-summer classic.

The Twins on Sunday, before beating the Texas Rangers 6-5, learned center fielder Byron Buxton and infielder Luis Arraez were selected to Major League Baseball’s All-Star Game. Both will represent the Twins as first-time All-Stars in Los Angeles on July 19 at Dodger Stadium. Both were selected as reserves for the AL squad.

Byron Buxton and Luis Arraez are headed to Major League Baseball's All-Star game for the first time as the Minnesota Twins are 48-40 and have a 4.5-game lead in the AL Central.

Twins manager Rocco Baldelli announced the team’s All-Stars in the clubhouse before Sunday’s game, and Arraez and Buxton each got celebratory bottles of champagne.

"This is amazing. It's a goal for everybody, especially for me. It's my first time I'm going, so I'm excited," Arraez said.

Buxton has played in 67 of the Twins’ 88 games, battling a knee issue since the first series of the season, and is hitting .215 with 11 doubles, two triples and a team-high 23 homers. Buxton, the No. 2 overall pick in 2012, is in his eighth season with the Twins.

"It’s cool, I get to enjoy that moment with my family. It’s a first for me, so just try to take in as much as I can. It’s definitely one of those days you won’t forget," Buxton said.

The Twins have a six-game home stand this week, with two against the Milwaukee Brewers and four against the Chicago White Sox, before heading into the All-Star break.