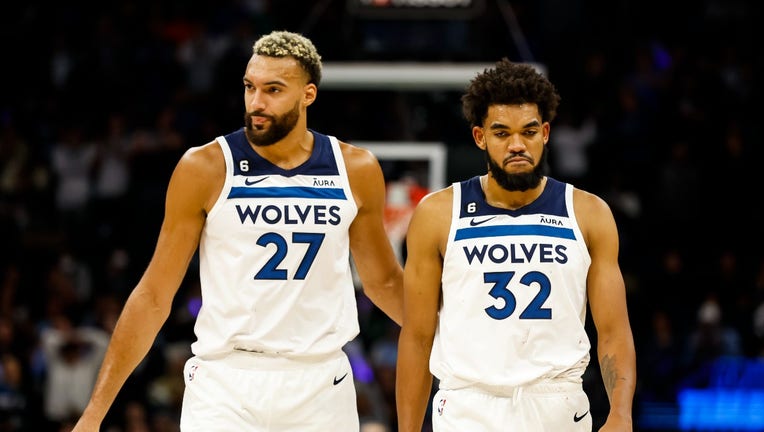 Rudy Gobert #27 talks to Karl-Anthony Towns #32 of the Minnesota Timberwolves in the fourth quarter of the game against the Oklahoma City Thunder at Target Center on October 19, 2022 in Minneapolis, Minnesota. The Timberwolves defeated the Thunder 11 ((Photo by David Berding/Getty Images))

MINNEAPOLIS - The Minnesota Timberwolves started a highly-anticipated season with a near sellout crowd at Target Center Wednesday night, and while they made life more difficult for themselves in the second half than it needed to be, they passed their first test with a 115-108 win over the Oklahoma City Thunder.

The talk in the offseason surrounded Tim Connelly trading five players and four future first round picks for center Rudy Gobert. He scored their first bucket of the season, and finished with 23 points and 16 rebounds in his Minnesota debut, leaving the Target Center floor to chants of "Rudy!" in the final minute of regulation.

Minnesota Timberwolves President of Basketball Operations Tim Connelly spoke with FOX 9 about his expectations for the 2022-23 season.

The night started with Gobert addressing the Target Center crowd during warm-ups, talking about the excitement for what the 2022-23 season could bring. Without him, they probably lose their season-opener to an inferior Thunder squad.

"I really appreciate the love. For me, it motivates me even more. I’m pretty motivated, but it feels good to see the crowd and the community embracing me already. It’s a great feeling," Gobert said after the win.

It didn't need to be as difficult as it was in the fourth quarter, but the Timberwolves are 1-0.

"Happy with the win of course. Some good stretches, some less than ideal ones. A good one to build on," Timberwolves coach Chris Finch said after the win.

After Gobert, it was largely the Timberwolves’ role players who had the biggest impact on the first win of the season.

Taurean Prince, Jaden McDaniels and Jaylen Nowell combined for 43 points on 14-of-26 shooting from the field. Prince was 4-of-5 from the field, including 3-of-4 from the perimeter.

The Timberwolves led 65-52 at the half, but got out-scored 35-22 in the third quarter and it was tied 87-87 after trailing by as many as six. Gobert got a steal and made a floater at the buzzer, which changed the momentum for the Timberwolves. He finished 10-of-15 from the floor, and when he wasn’t getting dunks or rebounds, he was altering shots on the defensive end.

"His impact was strong everywhere. Of course at the rim, his size down below bothered them. Really, really good," Finch said.

He also had an injury scare in the second quarter, taking a hard fall and grabbing his right knee, but waved off trainers and stayed in the game. Gobert said after it was just a bruise and a little sore, but otherwise fine.

Karl-Anthony Towns had only 12 points, but added six rebounds and had seven assists, many to Gobert for easy dunks. D’Angelo Russell added 20 points, five rebounds and two assists, and Anthony Edwards had 11 points, eight rebounds and seven assists as the Timberwolves had seven players in double figures. Minnesota had 25 assists on 38 made shots.

"Obviously we could’ve done better in a lot of things, but we squeezed that one out. Those are the wins we’ve got to win to be the team we want to be. Every game is going to be a test and a challenge for us," Russell said.

The Timberwolves got their first win of the season and that’s what matters, but there’s plenty to improve going forward as they start with five of their first six games at Target Center. They shot 41 percent from the field, but just 10-of-38 (26.3 percent) from the perimeter.

It wasn’t pretty, but a win is a win.

"It shows how good we can be and how much better we can be at the same time. It’s going to be a process, every night is going to be an opportunity for us to get better. Tonight was a great one for us," Gobert said.