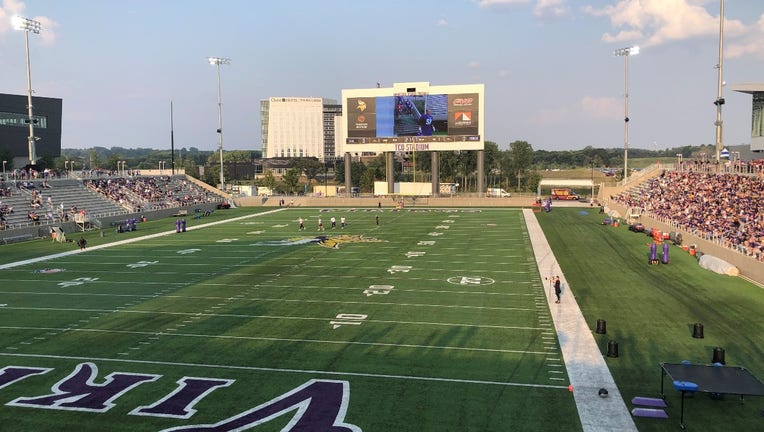 The Minnesota Vikings practiced in front of thousands of fans Saturday night at TCO Stadium in Eagan.

MINNEAPOLIS - Minnesota Aurora FC announced Thursday it will play home games in its inaugural season at TCO Stadium in Eagan, at the home of the practice facility for the Minnesota Vikings.

Team officials say the stadium currently holds about 5,500 fans, and can be temporarily expanded. Fans will also have the option to tailgate in the parking lot before games. Details on tickets will be announced at a later date, but interested fans can go to the team’s web site and put down a deposit for season tickets. The cost is $30 per ticket.

TCO Stadium has been a popular site for high school football games, and last year hosted the Granite Games fitness competition as part of a qualifier for the annual CrossFit Games.

The team released its inaugural schedule Thursday afternoon. Minnesota Aurora FC will have 12 regular season games, six at TCO Stadium and six on the road. They’ll open the 2022 season hosting the Green Bay Glory on May 26 at 7 p.m.

Here is a complete look at the Minnesota Aurora FC 2022 home schedule:

Minnesota Aurora FC will start the season with three of its first five games at home. It will finish with three straight road games.

Minnesota Aurora FC is the state’s first pre-professional women’s soccer team, and is part of the USL W League. The team is community-based, with more than 3,000 people already having ownership stake in the team before it even takes the field. The team, originally named Minnesota Women’s Soccer, was recently switched to Aurora FC after a fan vote and social media campaign. The emphasis is placed on the northern skies of Minnesota, and Minnesota being the North Star State.