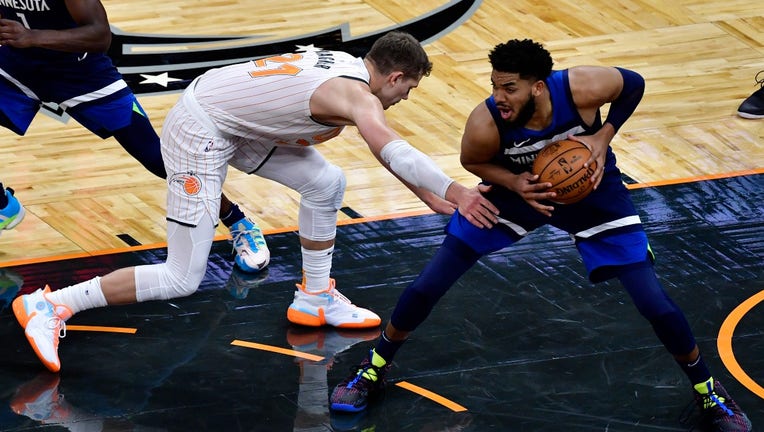 Karl-Anthony Towns #32 of the Minnesota Timberwolves handles a rebound as Moritz Wagner #21 of the Orlando Magic defends during the third quarter at Amway Center on May 09, 2021 in Orlando, Florida.  ((Photo by Douglas P. DeFelice/Getty Images))

MINNEAPOLIS - Sunday was emotional for Minnesota Timberwolves star Karl-Anthony Towns, his second Mother’s Day without his mom and first time playing on the day for moms after Jackie Towns died a little more than a year ago after complications from COVID-19.

Before the Wolves face the Orlando Magic Sunday, Towns shared an emotional moment with his father, one of several family members to be hit by the global health pandemic. Then, Minnesota dominated the Magic 128-96 for their 21st win of the season. Towns finished with 27 points on 10-of-19 shooting, nine rebounds and four assists in a little over 28 minutes.

"My family, my memories, this team, they give me the strength to go out here and play the game," Towns told Bally Sports North after the win.

The Timberwolves led by 30 points at the half, and by as many as 43 points in the second half.

The Timberwolves moved up to 13th in the Western Conference, a half-game ahead of the Oklahoma City Thunder. Minnesota is 6-4 in its last 10 games, and have four games left in the 2021 regular season. The Wolves finish their road schedule at Detroit Tuesday night, then end the season with a three-game home stand against the Denver Nuggets, Boston Celtics and Dallas Mavericks.

It remains to be seen whether the Wolves want to finish 2021 strong and build a foundation for next season, or protect their first round pick in the upcoming NBA Draft. The Timberwolves keep their pick if they finish in the top three of the NBA Draft Lottery, otherwise it goes to the Golden State Warriors as part of the trade package that sent Andrew Wiggins to the Warriors and brought Russell to Minnesota.

The Timberwolves can finish with as many as 25 wins, while the Magic (21), Cleveland Cavaliers (21) and Pistons (20) in the Eastern Conference all could finish with fewer wins than Minnesota.

"Winning is a lot more fun," Wolves coach Chris Finch said Sunday night. "So when winning is fun everything is a lot easier to reinforce what you've been trying to sell because the guys can see it working a little bit. They're buying in. They're doing things that make themselves and their teammates better."