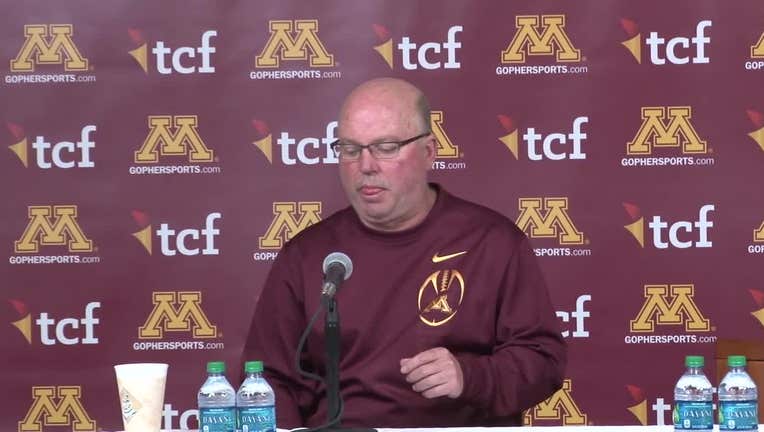 MINNEAPOLIS - New Mexico State made it official Tuesday morning that Jerry Kill is taking over as the school’s new head football coach.

Yes, the same Jerry Kill that was the head coach for the University of Minnesota from 2011 through seven games into the 2015 season, when he had to retire from coaching due to health concerns with epilepsy. The Gophers and PJ Fleck open the 2022 regular season with? You guessed it, Kill and the Aggies at Huntington Bank Stadium.

Tracy Claeys took over the Gophers’ program after Kill had to step down. Claeys was fired by Athletic Director Mark Coyle after Minnesota beat Washington State 17-12 in the Holiday Bowl. The game almost didn’t happen, after Gophers’ players threatened to boycott in support of players who were suspended for an alleged incident after their season-opening win over Oregon State.

Claeys was vocal on social media in support of his players’ decision to boycott the game at the time. In a radio interview not long after, Kill said he would never set foot in TCF Bank Stadium again. While it’s under a new name, Kill will have to break that vow on Sept. 1, 2022.

"You don’t think I haven’t had a million text messages about that? I’ll get booed out of that stadium probably. I don’t know, it’ll be interesting," Kill said Tuesday at his introductory news conference. "I had several people let me know that we were playing Minnesota. I did not know that when I took the job, but we’ll go up there get to go back in that stadium. Last time New Mexico State was there, they won so maybe that’s an omen we can follow into."

Kill was the Gophers’ head coach for that 28-21 loss to the Aggies in 2011. It’s one that’s now more known for Kill collapsing on the sideline, having a seizure and having to be rushed to the hospital. Kill finished 29-29 with the Gophers, including 14-21 in Big Ten play.

Kill has also made it known he’s not a fan of Fleck, who was an assistant for Kill at Northern Illinois. In a 2019 interview on Sirius XM radio, Kill took offense to Fleck’s comments that he needed to change the culture of the program at Minnesota after being hired by Coyle.

"When he went into Minnesota and treated people the way he treated my guys and told them he had to go in and completely change the culture and it was a bad culture and bad people — he made it sound like we didn't know what we were doing, and I took it personal," Kill said at the time. "Do I think he’s about the players? No. He’s about himself… I just lost a lot of respect."

Needless to say, the postgame handshake next September will be interesting.

Fleck just completed his fifth regular season at Minnesota with an 8-4 finish. He’s led the Gophers to a 34-23 record in that time, and they’ll be headed to their third bowl game in four years. Minnesota is 21-22 in Big Ten play in Fleck’s five seasons. Fleck signed a new seven-year contract after the Gophers beat Northwestern earlier this season, which came with a slight pay raise and increased buyout should another school want to hire him as head coach.