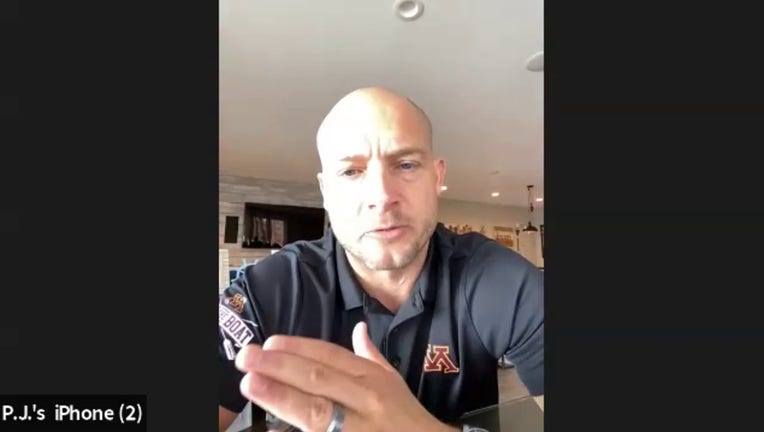 P.J. Fleck talked about Gophers Antoine Winfield Jr., Carter Coughlin, Kamal Martin and Tyler Johnson, who could all be picked in this weekend's NFL Draft.

MINNEAPOLIS - It’s NFL Draft day and like most of us, University of Minnesota football coach P.J. Fleck will be sitting on his couch watching it all unfold.

You can’t blame him if he’s there most of the weekend. The Gophers, coming off a historic 11-2 season, have four players who could hear their named called between now and Saturday. That hasn’t happened since 2015, when it was Maxx Williams, David Cobb, Cedric Thompson and Eric Murray. It’s only happened twice since 2006.

This weekend, several former Gophers are expected to head to the NFL, including one possible first-round pick. At the same time, Coach P.J. Fleck added another big prospect to a loaded 2021 recruit class.

“It’s a huge day for them, it’s a great opportunity for them and their families. They’ve earned the opportunity to have this become a special weekend for them,” Fleck told reporters Thursday morning via Zoom. “I think Gopher fans are going to be really excited about the guys that are drafted.”

Fleck hopes it’s the start of a regular trend. The program could also make history if safety Antoine Winfield Jr. gets picked in the first round Thursday night. Minnesota hasn’t had a first round pick since Laurence Maroney went No. 21 to the Patriots in 2006.

Winfield Jr. made the most of his only fully-healthy season with the Gophers. He led Minnesota with 88 tackles, 3.5 tackles for a loss and three sacks. He was named a consensus All-American, led the Gophers with seven interceptions and finished the year being named the Big Ten Defensive Back of the Year. He was a First Team All-Big Ten selection.

Winfield is one of the 58 prospects invited to participate in the virtual NFL Draft Thursday night. He could go late in the first round, and Fleck says one team will be lucky to have him.

“They’re getting a relentless football player with an incredibly high IQ. He’s a lot in a little frame,” Fleck said. “Ten years down the road, people are going to really look back and say ‘Boy, how did we miss on Antoine Winfield Jr.’ if they don’t take him? I think he’s a special player, he’s a once in a decade type player that comes along because he has it all.”

The three others in play are linebacker Kamal Martin, rush end Carter Coughlin and receiver Tyler Johnson. Martin and Coughlin are most likely Saturday selections, while Johnson appears to be a wild card.

Johnson chose to come back for his senior year with the Gophers, and made the most of it. He led the Gophers with 86 catches for more than 1,300 yards and 13 touchdowns, averaging more than 15 yards per catch. He went out with a bang, making 12 catches for 204 yards and a pair of highlight reel touchdowns in Minnesota’s 31-24 win over Auburn in the Outback Bowl.

Yet, he didn’t workout at the NFL Combine and never got to do a pro day due to the Coronavirus pandemic. In somewhat of a surprise, he’s projected as a mid to late round pick.

Minnesota’s recent success has been hard to ignore. Fleck already has 11 commitments for the 2021 class, and at least three four-star athletes. If they sign in December, it’ll mark the most four-star players at Minnesota in the internet recruiting era.

Adding to the attention, Winfield was featured on ESPN’s web site Wednesday in its draft coverage. Fleck says it’s the start of something much bigger in Gopher football. It’s the same method he had in taking Western Michigan from 1-11 to 13-0 and a trip to the Cotton Bowl. Wide receiver Corey Davis then became the No. 5 overall pick.