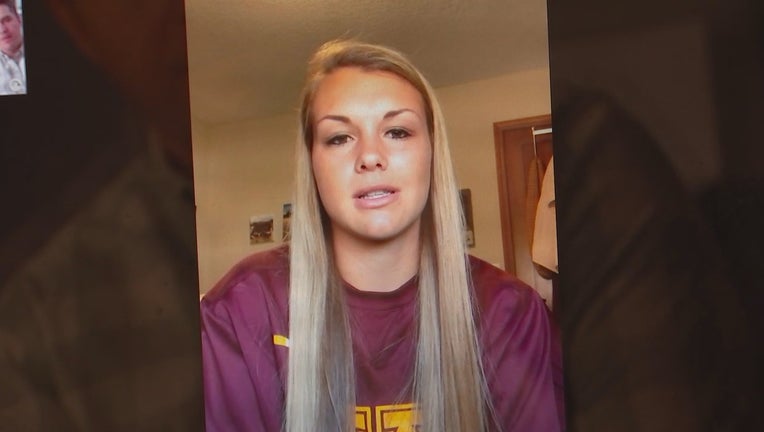 Amber Fiser, a senior Minnesota Gopher pitcher, is facing an uncertain future for her playing career after the season was cancelled due to coronavirus. (FOX 9)

MINNEAPOLIS - The University of Minnesota softball team was at a Denny’s in Hawaii having breakfast on March 12 before a game when the Coronavirus pandemic ended their season.

The Gophers were 15-9-1, and as they were eating, the coaching staff gathered them into a separate room to deliver some bad news. The NCAA had canceled all winter and spring sports as the Covid-19 pandemic was getting worse by the day. To add insult to injury, one of the players returned to her seat after the team meeting to find what was left of her pancakes had been taken away by a server.

The University of Minnesota softball team was at a Denny’s in Hawaii having breakfast on March 12 before a game when the Coronavirus pandemic ended their season.

“That was the only funny part about that day,” senior pitcher Amber Fiser said Thursday via Zoom.

Minnesota’s season was over before it ever got the chance to compete for a Big Ten title, host an NCAA regional or get back to the College World Series. It appeared at the time that Fiser’s career, as well as five other seniors on the team, was over because of something they had no control over.

“I remember being in Hawaii and getting the news, it was devastating. At that moment, I thought my career was done. I didn’t think I’d get another opportunity,” Fiser said.

That changed within the span of a few days. The NCAA recently announced that spring senior athletes will get the chance, if they so choose, to earn a fifth year of eligibility and return in 2021.

The decision isn’t as much of a no-brainer as it might seem. Most seniors are focused on what’s to come after sports, many already have jobs or the start of their careers lined up before they get their degree.

Fiser is finishing school online and will graduate in May, regardless of if the University of Minnesota hosts commencement. She plans to enroll in graduate school, and told her coaches and teammates she’ll be back for one more year.

“We’re never going to be able to have that chance again, so that was kind of one of my biggest factors, that I only get this opportunity once so I’m going to fulfill that dream,” Fiser said.

That’s music to the ears of coach Jamie Trachsel and her teammates. Fiser entered the season an All-American after going 31-9 last year as a starting pitcher with a 1.27 earned round average. She recorded 346 strikeouts and just 74 walks in more than 259 innings pitched.

Fiser was the ace as the Gophers finished runner-up at the Big Ten Tournament, then swept LSU to earn a trip to the College World Series. The goal was to build off that this spring, and the Gophers were off to a 15-9-1 start. Fiser was 10-7 in 21 appearances this year, including 15 starts, with a 2.17 ERA and 145 strikeouts in 100 innings.

Fiser went to social media on Wednesday to announce her decision to return to the Gophers next year. But before that, she called Trachsel and the other coaches to deliver the good news.

“She was really happy about that. I called all the coaches before I made the announcement, and they were all really, really excited to have me back. Same with my teammates, all of them have reached out to me and they’re really excited to have another year and just see how great we’re going to be,” Fiser said.

Things have changed quite a bit for the senior since having to fly home from Hawaii. She stayed around campus for about a week before heading home to Iowa. She says the team holds video chat meetings weekly to stay in touch, and players have partners that they communicate with twice per week to stay connected.

Fiser, like many athletes, have found being confined inside a majority of days challenging. She’s finishing school online, getting in workouts when she can but hasn’t done anything softball-related since the season ended. She says she’ll start throwing next week.

So what’s she doing to stay busy away from school? Puzzles, and online shopping.

“It’s been driving me crazy. I don’t know how many times I’ve walked out to my dad every single day and say ‘I don’t know what to do, I’m so bored.’ I went from 100 percent of traveling, softball and school 24/7 to actually doing nothing. It’s a very, very hard transition,” Fiser said. “Last week my grandma dropped off three 1,000-piece puzzles so I’ve put together one and I’m trying to get myself to do some other ones.”

More than anything, she’s grateful and thankful that she’s getting another chance to play the game she loves one more year.

“Everything is precious. You only get four years to do this so having a fifth opportunity is absolutely huge,” Fiser said. “Just having that all taken away in the blink of an eye was devastating. Having the NCAA, the university and the Big Ten all allow me that opportunity to do it again, it was a very big relief.”