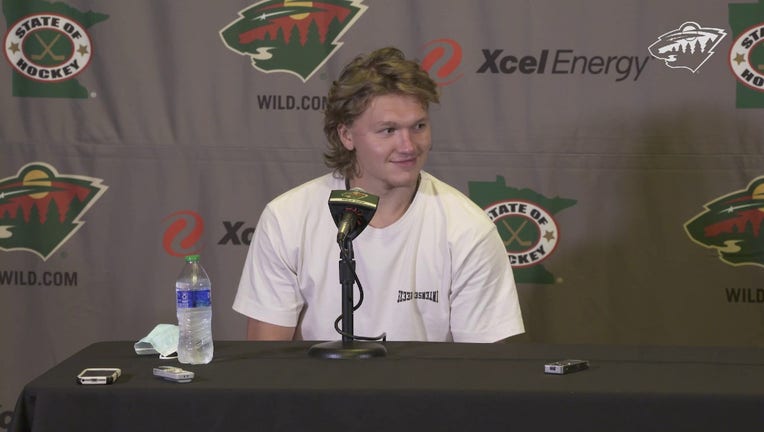 Kirill Kaprizov talked Wednesday about signing a 5-year deal to stay with the Minnesota Wild.

MINNEAPOLIS - It took a few months and an in-person meeting between Kirill Kaprizov and the Minnesota Wild front office in Florida, but franchise’s newest star is staying in Minnesota.

Kaprizov, 24, signed a five-year, $45 million contract with the Wild on Tuesday after in-person negotiations with General Manager Bill Guerin. The Wild’s front office head was contacted by Kaprizov and his agent on Monday, and Guerin was on a plane to Florida that night.

The two headed back to the Twin Cities Tuesday night, and they spoke with reporters from Wild team headquarters on Wednesday.

"This is a big day for us. We have high hopes for the season, and getting this deal done with Kirill was big for our team, big for the organization, big for our fan base and we couldn’t be happier," Guerin said.

"Extremely happy. I’m happy to get this done. From day one it seemed evident that the team was obviously really happy. Now I just want to focus on hockey and play the game and play right," Kaprizov said through an interpreter.

Kaprizov said the contract talks were stressful and difficult, but what matters is he’s staying long-term with the organization that drafted him. Guerin said it was important to him and Kaprizov to get the deal done in person, after months of talking on the phone.

Kaprizov also took it upon himself to fly from Russia to Florida, get a COVID-19 vaccine and quarantine. The Wild open training camp on Thursday at TRIA Rink, and Kaprizov is expected to be on the ice with his teammates.

Kaprizov won the Calder Trophy last year as the NHL’s top rookie. He led league rookies in goals (27) and points (51), which also led the Wild. He made an immediate impact with Minnesota, getting three points, including the game-winning overtime goal, to open the season at the L.A. Kings.

His combination of skill and speed quickly earned him the nicknames "Kirill the Thrill" and "Dolla Bill Kirill."

He also had three points in the Stanley Cup Playoffs against the Vegas Golden Knights. So is there pressure to perform with a new contract, and as the face of the franchise?

"No, no pressure. I just want to play hockey," Kaprizov said.

"Kirill is an exceptional player, he’s done a lot for our team, done a lot for our market. It doesn’t matter what you make, when you sign, you sign, that’s it. We’ve put that stuff behind us, there’s no added pressure from us. He’s happy, that’s what’s important and he’s ready to play hockey," Guerin said. "Kirill is a leader 100 percent. It’s not because of the contract, it’s because of what he does on the ice. He goes out on the ice and performs at such a high level, that’s leadership."

Kaprizov shot down a report earlier this summer that if a deal with the Wild wasn’t reached by Sept. 1, he would stay in Russia this year and play in the KHL.

Now, the Wild’s newest star will get to play his first game in front of a full house at Xcel Energy Center in October. Thousands of fans have already invested in No. 97 Kaprizov jerseys.

There were tense moments in the offseason, but now Kaprizov is a member of the Wild through the 2025-26 season.

"I’m really happy that I’m here now and I get to just focus on hockey," Kaprizov said.