The Minnesota Vikings are back home for three straight games, starting with the Dallas Cowboys Sunday afternoon, after going to Buffalo and getting an emotional 33-30 win in overtime over the Bills and Josh Allen.

Before kickoff, tune into FOX 9 for Vikings Gameday Live with Mark Rosen, Dawn Mitchell, Ron Johnson, Pete Bercich and Ben Leber to get a full preview of Sunday’s game.

The Vikings improved to 8-1, and have won seven straight games under first-year coach Kevin O’Connell. Justin Jefferson has been the talk of the NFL this week after getting a career-high 10 catches for 193 yards and a touchdown, including a one-handed catch on a 4th-and-18 play late in regulation that kept the game alive. The Vikings also got two interceptions from Patrick Peterson, including the game-clincher, and a fumble recovery for a touchdown from Eric Kendricks after the Bills failed to get the ball out of the end zone in the final minute of regulation.

After winning a game of crazy twists and turns, the Vikings have to come down from an emotional high and face the Cowboys, who are coming off a loss to the Packers last week.

The win at Buffalo proved to the rest of the NFL that the Vikings are not only favored to win the NFC North, but should be considered Super Bowl contenders. The Vikings came back from down 17 points late in the third quarter to win the game in overtime. 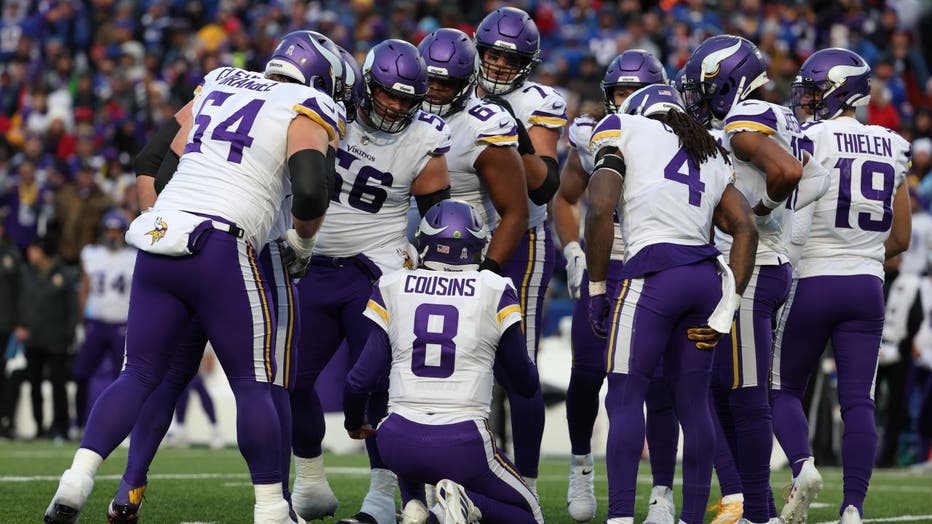 Kirk Cousins #8 of the Minnesota Vikings calls a play in the huddle during a game against the Buffalo Bills at Highmark Stadium on November 13, 2022 in Orchard Park, New York. (Photo by Timothy T Ludwig/Getty Images)

Catch this week's Vikings Gameday Live from 9:30-11 a.m. on FOX 9, streaming in the player at the top of the page and on FOX 9's YouTube page here.