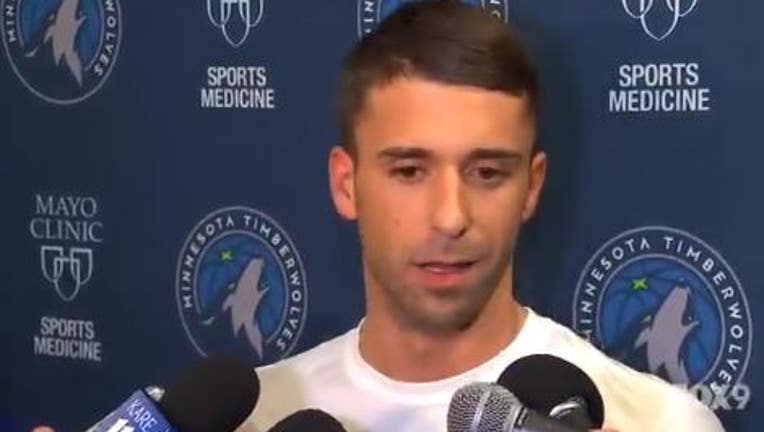 MINNEAPOLIS - Several teams and athletes have gone to social media to express their thoughts and emotions since George Floyd’s death in Minneapolis, and the Minnesota Timberwolves are no exception.

Floyd died in a Memorial Day incident where four Minneapolis Police department officers responded to a report of a forgery in progress at 38th and Chicago. Police reports indicated Floyd, who appeared “under the influence,” attempted to buy cigarettes with a counterfeit $20 bill. He was spotted by responding officers and placed in handcuffs.

That’s when the situation escalated, with Floyd being restrained on the ground by officer Derek Chauvin having his knee on Floyd’s neck, despite Floyd being in handcuffs and unarmed. Floyd screamed for help and said, “I can’t breathe” before losing consciousness. He was eventually taken to Hennepin County Medical Center, where he was pronounced dead.

Chauvin is now at the Oak Park Heights state prison, and is due in court next Monday on charges of third degree murder and manslaughter. In the aftermath of Floyd’s death, there has been a week of both peaceful and violent protests in Minneapolis.

In an interview with ESPN’s Mina Kimes on Monday, Timberwolves coach Ryan Saunders said change can happen by having empathy and taking action.

“George Floyd, he should still be alive right now, but there’s a number of other black males especially that should still be alive right now, and we need to stand with those individuals. I think being vocal is big, but then taking action. I don’t know what the action is yet, but I know there’s good people, not just in Minnesota but in this country, that can take action,” Saunders said. “We just need to commit to it and stay with it.”

Saunders said for him, it comes down to listening and learning. The Wayzata native hasn’t had a lot of exposure to racism and social injustice.

“As a white male, I need to be a listener in a time like this, first and foremost, because I don’t understand in a lot of ways what others, in particular black males, have had to endure on a daily basis,” Saunders said.

Wolves players have expressed their thoughts on social media, and some have peacefully protested Floyd’s death. Karl-Anthony Towns made his first public appearance since his mother’s death from Coronavirus to support NBA star Stephen Jackson, a close friend of Floyd’s, at a rally last Friday in Minneapolis.

Josh Okogie has been among the most vocal Wolves players on social media. He talked about calling for change in an interview with NBA TV on Tuesday.

“We want to see that all these protests aren’t in vain. Personally, I think the situation could’ve been handled more effectively. I think that all those officers who were there at the scene should face some type of consequences. I feel like it shouldn’t take a video, it shouldn’t take outrage to see justice,” Okogie said. “I think we need a change to our justice system. I think a lot of times when these incidents happen and we ignore them, it sets a precedent. If we can make an example out of this incident, it can stop future problems from happening.”