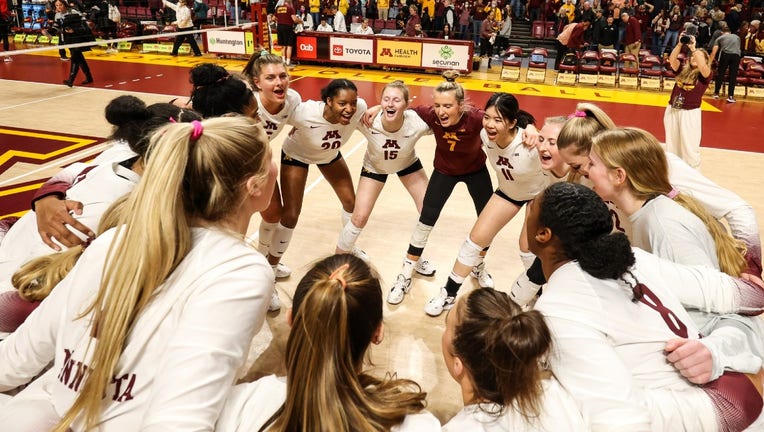 The Gophers are the No. 2 seed in the Texas Regional and the No. 8 seed overall. This weekend will be the last time the program plays at The Pav under Hugh McCutcheon, who announced back in October that this year would be his last as Minnesota’s head coach. But the tone around the team as it enters postseason play isn’t bittersweet.

The Gophers volleyball team is the No. 8 overall seed for the NCAA Tournament in Hugh McCutcheon's final season with the program.

The Gophers ended the regular season with top-10 road wins over Ohio State and Nebraska, and their goal is chasing a championship.

"This has never been about me, we’re just out here competing. We’re here to try to be the last team standing, that’s always the goal. Our focus is there, as it should be," McCutcheon said before Tuesday’s practice.

The players want to do everything they can to send McCutcheon out the right way. The Gophers are 11-2 since McCutcheon’s departure was announced. He’s taking a newly-created role, starting in January, as assistant athletic director and sport development coach at Minnesota.

"Once the news came out, that was definitely something our team united on. If there’s anything to fight for this season, it’s Hugh and it’s each other," senior libero CC McGraw said. "It’s not something we talk about a lot, I don’t think it’s our only narrative for the season, but we definitely want to finish things off for him and for this team because we know what we’re capable of."

The path to getting to the NCAA Tournament might be the program’s most impressive in McCutcheon’s 11 seasons. The Gophers enter the postseason 20-8, 15-5 in the Big Ten and having won three straight matches. Six of their eight non-conference opponents were top-25 teams at the start of the year, and all eight are in the NCAA field.

Add to that six teams in conference play ranked throughout the season, and to call the Gophers battle-tested is an understatement as they head to a single-elimination format.

Assuming the Gophers handle SE Louisiana Friday, they would face the Florida State/Northern Iowa winner Saturday night for a trip to the Sweet 16.

"Obviously it’s a different kind of pressure. Being in the Big Ten is a pressure in itself, playing the top teams in the country. I think we also feel like when you’re in Big Ten, it’s one-and-done because you can’t lose too many games if you want to win the Big Ten championship," Melani Shaffmaster said. "With our schedule we’ve had and playing in the Big Ten, it’s prepared us super well."

McCutcheon has 274 wins in 10-plus seasons at Minnesota. He’s led the Gophers to three NCAA Final 4s, five Elite 8s and nine Sweet 16s. It’s his hope the journey isn’t over after a pair of matches at The Pav, which the team says is the best home environment in college volleyball.

"We do not take it lightly. I think there’s an expectation around this program that we’re going to have all of these outcomes, all the success and it’s great that we’ve been able to sustain that. But none of it is guaranteed, and we just think it’s great that we’re still playing," McCutcheon said. "I just know that I feel extremely grateful to coach this team and to have gone through this journey with them, and the journey is not done. There’s just so much to feel good about with the way this team has worked and learned and competed. Just grateful."