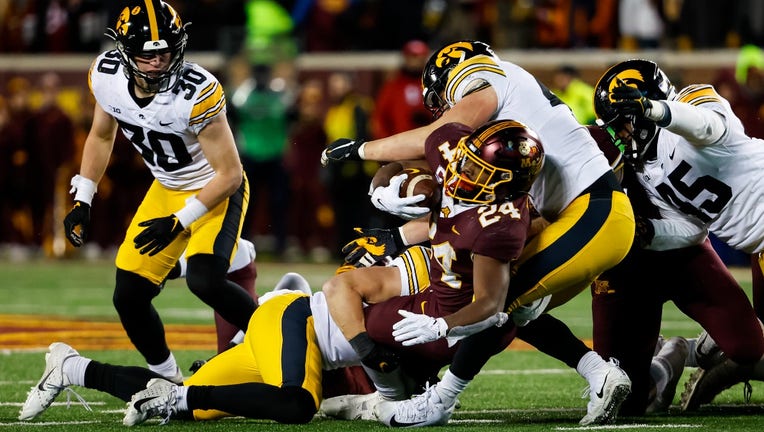 Mohamed Ibrahim #24 of the Minnesota Golden Gophers is tackled by Cooper DeJean #3 of the Iowa Hawkeyes in the fourth quarter of the game at Huntington Bank Stadium on November 19, 2022 in Minneapolis, Minnesota. The Hawkeyes defeated the Golden Goph ((Photo by David Berding/Getty Images))

MINNEAPOLIS - The University of Minnesota football team didn’t keep Floyd of Rosedale in Minneapolis, but the Gophers got a Big Ten weekly honor after a special performance from Mo Ibrahim on Senior Day.

Ibrahim was named the league’s Offensive Player of the Week on Monday after having 39 carries for 263 yards and a touchdown against a stout Iowa defense, despite a 13-10 loss to the Hawkeyes. It was Ibrahim’s fifth career 200-yard game, 19th straight 100-yard game and he scored his 19th touchdown of the season.

The 263 yards is a stadium record, led the nation last week and he averaged 6.7 yards per carry. It’s the most rushing yards for a Gophers’ running back in a game since Chris Darkins ran for 294 yards against Purdue in 1995. Ibrahim also eclipsed David Cobb’s mark of 220 yards in 2014 against Middle Tennessee State, at then TCF Bank Stadium.

The honor is the second for Ibrahim in his career.

In 10 games, Ibrahim leads the nation with 19 rushing touchdowns, 152.4 yards per game and is second in the country with 1,524 rushing yards. He has a touchdown in 11 straight games. His 19 rushing touchdowns passed Gary Russell’s single-season record of 18 in 2005. Ibrahim also passed Darrell Thompson with his 24th career 100-yard rushing game.

Ibrahim needs 103 more yards this season to break Cobb’s 2014 school record of 1,626 yards. He has 4,527 career rushing yards in 39 games and needs 128 yards to pass Thompson for the all-time rushing record. He’s also on pace to pass Laurence Maroney’s career record of averaging 109.3 yards per game. His 52 career rushing touchdowns is sixth in the history of the Big Ten.

The Gophers (7-4, 3-4) travel to Wisconsin Saturday in the annual battle for Paul Bunyan’s Axe. The Gophers beat the Badgers 23-13 last season.