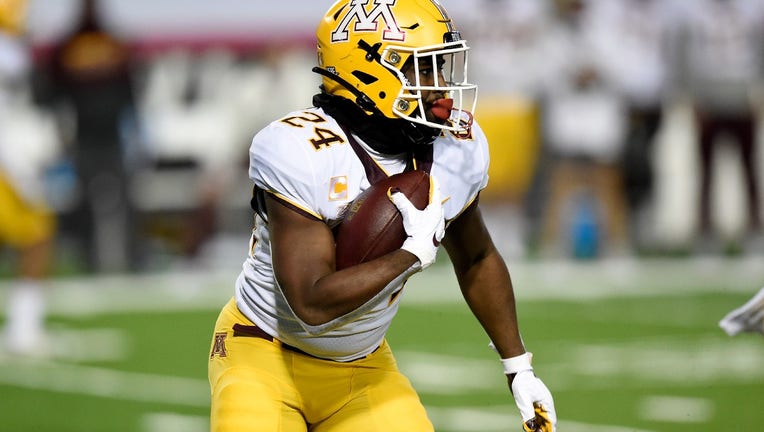 Mohamed Ibrahim #24 of the Minnesota Golden Gophers rushes the ball in the first half against the Maryland Terrapins at Capital One Field at Maryland Stadium on October 30, 2020 in College Park, Maryland.  ((Photo by G Fiume/Maryland Terrapins/Getty Images))

MINNEAPOLIS - The University of Minnesota football team hasn’t started fall camp yet, and they’re already being nominated for preseason awards.

On Wednesday, Mo Ibrahim was named a preseason candidate for the 2021 Doak Walker Award, which goes annually to the top running back in college football. Ibrahim is back for his final season with the Gophers after being named the Big Ten Running Back of the Year, and a First Team All-Big Ten pick in 2020. Ibrahim was a semifinalist for the Doak Walker Award last year.

Despite playing in only seven games, Ibrahim led the Big Ten in rushing (1,076 yards) and rushing touchdowns (15). He’s already been named a preseason All-American by Athlon Sports, Phil Steele Publications and the Walter Camp Foundation.

Ibrahim is also one of 80 players on the Maxwell Award Watch List, which goes annually to the outstanding player in college football.

The Gophers, coming off a 3-4 season, open the 2021 regular season against Ohio State on Thursday, sept. 2, at Huntington Bank Stadium.