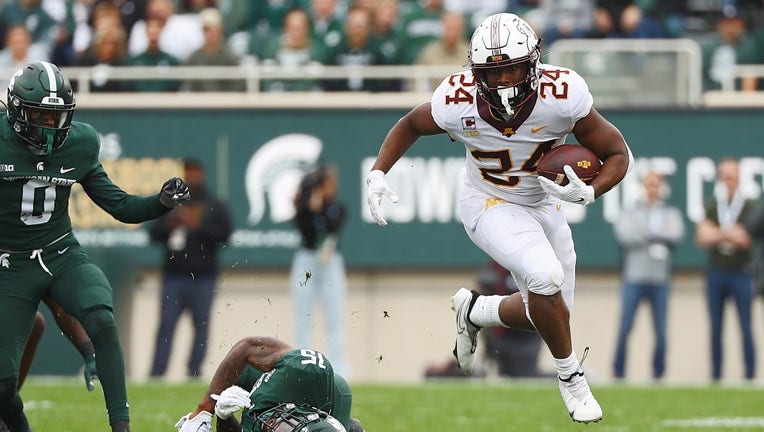 Mohamed Ibrahim #24 of the Minnesota Golden Gophers leaps after avoiding a tackle by Angelo Grose #15 of the Michigan State Spartans in the first half at Spartan Stadium on September 24, 2022 in East Lansing, Michigan.  ((Photo by Mike Mulholland/Getty Images))

MINNEAPOLIS - It appears that the University of Minnesota football team is for real.

The Gophers opened the Big Ten season at Michigan State Saturday, a team ranked in the top-15 in the nation entering the season and coming off a 39-28 loss at Washington. Minnesota faced questions after going 3-0 in the non-conference with lopsided wins over New Mexico State, Western Illinois and Colorado by a combined 149-17.

Any questions going into Saturday's Big Ten opener were answered. The Gophers got off to a fast start in East Lansing and never took their foot off the gas in a 34-7 dismantling of the Spartans in front of more than 70,000 fans to improve to 4-0. It’s Minnesota’s first win at Michigan State since 2006, and snaps a five-game losing skid against the Spartans. If not for a garbage time touchdown by the Spartans, it would’ve been Minnesota’s first shutout win in a Big Ten game since 2004 against Illinois.

"We talked about total consistency across the board, and total consistency by executing the game plan. That’s what we’re going to have to continue to be," Gophers coach PJ Fleck said after the win. "You saw playing for each other. We talk about there’s a difference between a group and a team in our culture. This is a team, that’s what I love about these guys. They just love playing the game."

Coach PJ Flect and Gophers players react after the Gophers dismantled Michigan State in front of more than 70,000 fans in East Lansing to improve to 4-0.

Minnesota out-gained Michigan State 310-45 in the first half and had the ball for nearly 21 minutes. Tanner Morgan was 17-of-20 for 207 yards and a 23-yard touchdown to Daniel Jackson. In his first game without top receiver Chris Autman-Bell, Morgan hit nine different receivers in the first half, and 10 for the game.

"We had Crab with us the whole time. He’s in all of our hearts, but the goal is to be consistent and execute the game plan. I felt like we did that pretty well," Jackson said.

Mo Ibrahim had 16 carries for 71 yards and a score in the first half, breaking Darrell Thompson’s all-time record with his 41st career touchdown, as the Gophers built a 17-0 lead.

The Gophers’ defense got an interception from Justin Walley, a sack from Ryan Stapp and limited the Spartans to three first downs in the first half. Michigan State ran just 19 plays in the opening 30 minutes.

A potential Spartans’ scoring drive to start the third quarter ended with Thomas Rush forcing a Payton Thorne fumble, which Walley recovered. The Gophers turned it into points, with Morgan hitting Nick Kallerup for a 6-yard touchdown, the first of his career, and 24-0 lead.

Minnesota’s defense then got another turnover, with Danny Striggow intercepting a screen pass. The Gophers delivered the knockout punch, with Morgan hitting Daniel Jackson for his second touchdown of the day from four yards out for a 31-0 lead early in the fourth quarter.

The Gophers had 22 offensive plays of at least 10 yards, and collected 508 total yards in the win, with 242 of them coming on the ground. They had 32 first downs, and were 10-of-12 on third down. Morgan finished the day 23-of-26 for 268 yards and three scores. Jackson finished three catches for 42 yards and two touchdowns. Ibrahim got his 13th straight 100-yard game with 22 carries for 103 yards and a touchdown.

"I’ve been saying it for a long time now, we have a lot of guys who can go make plays for us. We saw that today," Morgan said.

Minnesota’s defense limited Michigan State to 240 total yards, just 38 on the ground and just 2-of-8 on third down.

The Gophers answered any questions after the non-conference season with the most dominating performance of the season, and maybe of PJ Fleck’s tenure at Minnesota. In four games, the Gophers have now out-scored opponents by a combined 183-24.

The Gophers host Purdue for Homecoming next week, and their challenge will be handling prosperity. Minnesota will be ranked when the new college football polls come out on Sunday.

"You guys have had outside noise from the start. I love you for it, it gives me something to be able to talk to our team about. I hear what you write, I meet with you all the time, I see you. They’re going to hear it, I know that, I’m not dumb," Fleck said. "But we need the internal message to be way louder than the external message."