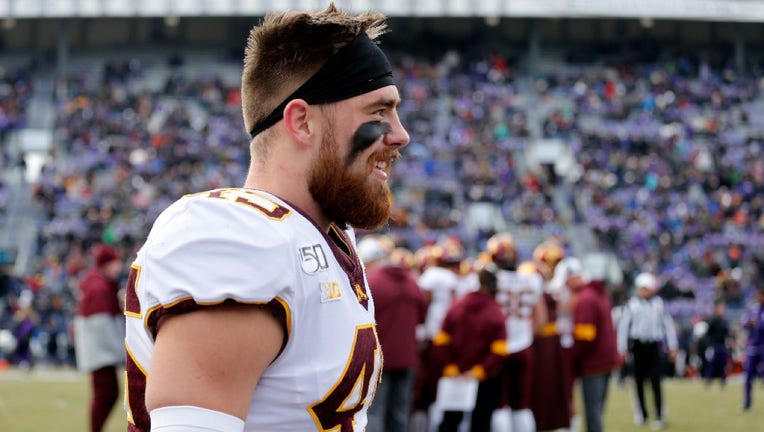 Carter Coughlin #45 of the Minnesota Golden Gophers plays against the Northwestern Wildcats at Ryan Field on November 23, 2019 in Evanston, Illinois. ((Photo by Nuccio DiNuzzo/Getty Images))

(FOX 9) - It’s not an ideal time to try to land your dream job but that’s the scenario for countless NFL hopefuls, including former Gopher Carter Coughlin.

The linebacker should’ve been lining up for scouts this week at Gophers Pro Day, an event eliminated due to COVID-19 concerns. It is yet another challenge for players like Carter to tackle during this unprecedented time as they prepare for the NFL.

It’s not an ideal time to try to land your dream job but that’s the scenario for countless NFL hopefuls, including former Gopher Carter Coughlin.

“For me, I would’ve been able to do more position work with coaches, there were seven teams I set up to meet with,” Coughlin said of the cancellation of pro day. “There would’ve been some huge pluses to pro day.”

Coughlin did get to display his skill set at the Senior Bowl and at the NFL Combine, meeting with almost every NFL team in some fashion at those events he told FOX 9.

“I’m glad I got to go to the combine and show teams that I’m more athletic than they thought I was,” Coughlin said. “My ability to pass rush allows me to fit in a bunch of different systems.”

For now, Coughlin is quarantining in Minnesota. Taking time to work out and fine-tuning things in his family’s garage.

“We’ve got a squat rack and extra (weighted) plates,” Coughlin says of his new workout situation. “Obviously, it’s not exactly how I would like to be training, but as long as I make sure that I do everything I can to prepare for the future then I’m happy with it.”

Coughlin is doing all of this while recalling his time with the Gophers and head coach P.J. Fleck. Coughlin taking things as they come in the process of prepping for the pros.

“You just need to be able to adapt to it,” Coughlin says of his current path to the pros. “We know that with being a part of Gopher football, it’s all about the response.”

It’s a mantra that also makes sense in relation to where might go in the draft.

“You could have an idea of which team is going to take you in which round, and then all of a sudden some team who you thought had no interest drafts you,” Coughlin said of the uncertainty surround the NFL Draft.

“It can all change.”