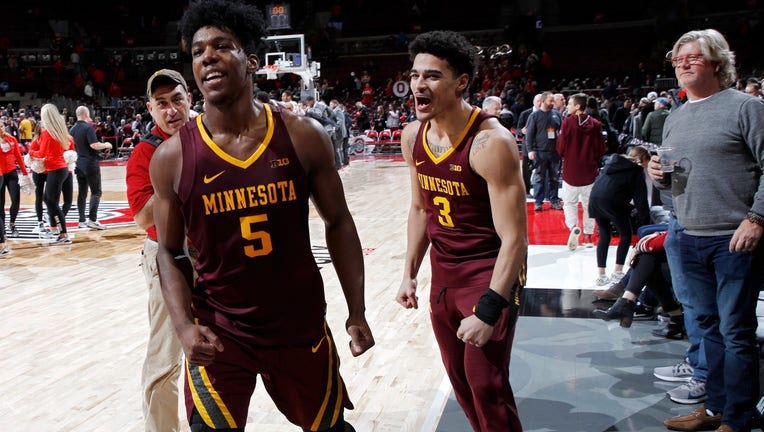 Marcus Carr #5 of the Minnesota Golden Gophers celebrates with Bryan Greenlee #3 after hitting the winning shot against the Ohio State Buckeyes in the second half of the game at Value City Arena on January 23, 2020 in Columbus, Ohio. Minnesota defeat ((Photo by Joe Robbins/Getty Images))

Carr finished with 21 points on 7-of-13 shooting, including 3-of-5 from three-point range, as the Gophers battled back from trailing 39-28 early in the second half. Gabe Kalscheur added 13 points, and Daniel Oturu scored 11 points and grabbed six rebounds after going scoreless in the first half.

Carr added seven assists and just one turnover as he played 38 minutes. He now has a combined 56 points in two wins over Ohio State this season. He scored a career-high 35 points when the Gophers beat the then No. 3-ranked Buckeyes 84-71 in the Big Ten home opener at Williams Arena.

Minnesota entered the game 0-6 in true road games this season. At one point this week, road teams in the Big Ten had a combined 18-52 record. It’s a Quadrant 1 road win as the Gophers continue to try to put together an NCAA Tournament resume.

It's Minnesota's first win at Ohio State since 2005.

Carr drove and scored to cap an 11-1 run and get the Gophers within 40-39 early in the second half. He then gave the Gophers their first lead of the second half at 49-48 after getting a steal and going coast-to-coast for a basket.

With the game tied 57-57, Kyle Young scored over Alihan Demir to give the Buckeyes the lead with 1:01 to play. Carr scored in traffic to tie the game 59-59, then the Gophers got the ball back off an Ohio State miss. It set up Carr’s heroics, hitting a long 3-pointer off a screen for the game-winner.

Minnesota limited Ohio State to 37 percent shooting in the second half, including just 1-of-7 from three-point range. The Gophers also forced 12 Ohio State turnovers, and scored 10 points off those turnovers. Oturu and Carr combined for 24 of the Gophers’ 34 second half points.

The Gophers (11-8, 5-4) host Michigan State Sunday afternoon at Williams Arena. Former Gopher great Willie Burton will be recognized at halftime and have a banner raised in his honor.