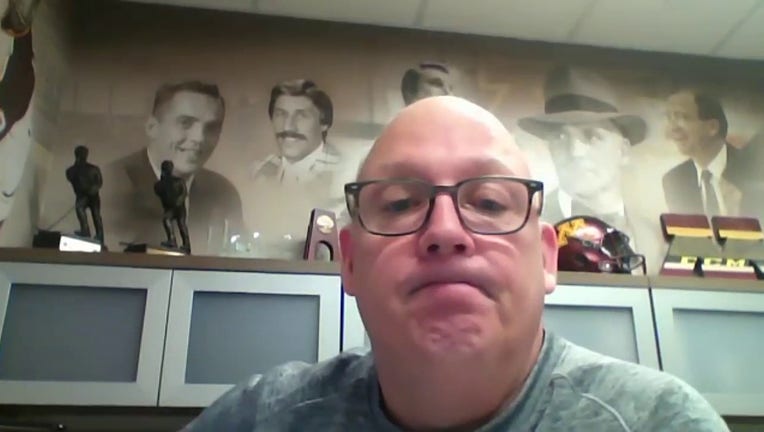 Gophers hockey coach Bob Motzko spoke with reporters on Monday about the 2021-22 season, and returning to the ice less than 2 months after his son's death in a July car crash.

MINNEAPOLIS - Bob Motzko’s life will never be the same as he enters his fourth season with the University of Minnesota men’s hockey team, and it has little to do with anything that happens on the ice.

Motzko’s son, Mack Motzko, died in late July at the age of 20 after a car crash near Orono. Motzko was one of two passengers in the car, and the driver, 51-year-old James Blue, has been charged with four counts of criminal vehicular homicide in the incident. Evidence shows Blue was driving drunk, with a blood alcohol level more than twice the legal limit, at nearly 100 miles per hour and had drugs in his system.

Charges state Blue, who has a residence near the crash site, wanted to show Mack and his friend, Sam Schuneman, who also died in the crash, his Bentley.

Bob Motzko took the ice with the Gophers for the first time last week, as they get ready to host Alaska in their season-opener on Oct. 2. That night will likely be one of the toughest of Bob Motzko’s career.

"The world that I had before no longer exists. We have to do a lot of rebuilding, but when I come to the rink and we get on the ice and I get around my staff, it’s familiar territory. I’ve been doing this a long time, there might times this year I need my players more than they’re going to need me, especially early in the year," Motzko told reporters on Monday. "We’re getting through. I’m comfortable coming to the rink, definitely when you get out on the ice you can close things down and put your focus with your players. They’ve been remarkable, it’s a great outlet for me right now."

The incident shook the entire hockey community in Minnesota. Mack Motzko had graduated from St. Cloud Cathedral in 2020 and was getting ready to play junior hockey before the July crash.

Less than two months removed from the tragedy, healing will take time for the Motzko family.

"Coming to the office, being around our players for me, with what we’re going through, any distraction you can get is good," Motzko said.