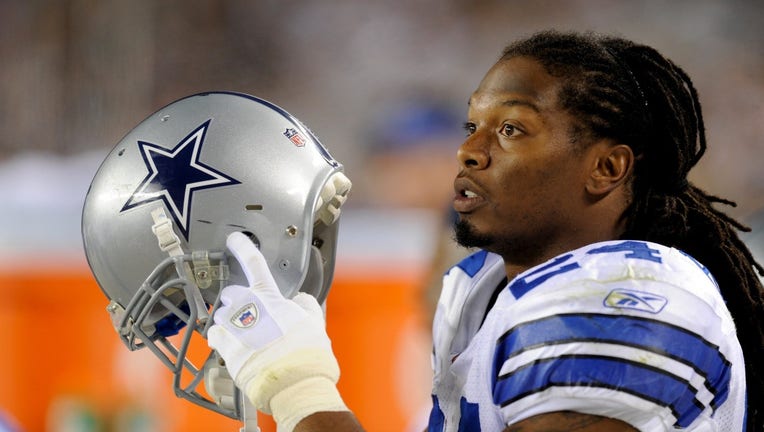 Marion Barber #24 of the Dallas Cowboys looks on against the Philadelphia Eagles at Lincoln Financial Field on November 8, 2009 in Philadelphia, Pennsylvania. The Cowboys defeated the Eagles 20-16.  ((Photo by Rob Tringali/Sportschrome/Getty Images))

The Collin County Medical Examiner’s Office on Monday released its report on Barber’s death. It has been ruled accidental. Barber was found dead in his Frisco, Texas apartment on June first after police were called on a welfare check. Barber was just 38 years old, and less than two weeks from turning 39.

According to a USA Today report, the autopsy report for Barber’s death says one of the bathtub faucets in the apartment was running when officers arrived. The apartment unit’s thermostat was also set to 91 degrees, with the heat set to "on." Authorities also found exercise equipment in the unit.

According to the USA Today, the autopsy report said, "Mr. Barber was known to exercise in sauna-like conditions."

Marion Barber III never got the chance to play at Huntington Bank Stadium, but the University of Minnesota honored the life of the former Gophers’ star on Wednesday at the football team’s home.

On June 22, family, friends and former teammates of Barber gathered at Huntington Bank Stadium for a celebration of his life. The speakers at the service included his Gophers’ coach, Glen Mason, his running back teammate, Laurence Maroney and several of his teammates with the Dallas Cowboys, including Terrell Owens.

Maroney apologized to Barber’s family for not doing more to help his brother and teammate. Since retiring from football in 2012, Barber had been struggling with his mental health.

"He was not just a teammate to me, not a guy I made history with, not a guy I just met at Minnesota but truly my brother. This one hurts, it hurts deep," Maroney said. "To the family, I’m going to always be hurting with y’all. I can’t shake the feeling of there’s something more I should’ve done. I’m sorry because I couldn’t figure out the more. I apologize and I’m sorry to the family. Marion, until we meet again, I love you too brother."

The Cowboys drafted him in 2005, and he spent six seasons in Dallas. Barber earned a spot in the Pro Bowl in 2007 after rushing for 975 yards and 10 touchdowns. He finished his NFL career with 4,780 rushing yards and 53 rushing touchdowns.

"When I heard the news, it shook me to my core, like everybody else. Everybody that came into contact with him the last three to five years, we often played in my head what could I have done? What could we have done differently? We don’t know," Owens said.