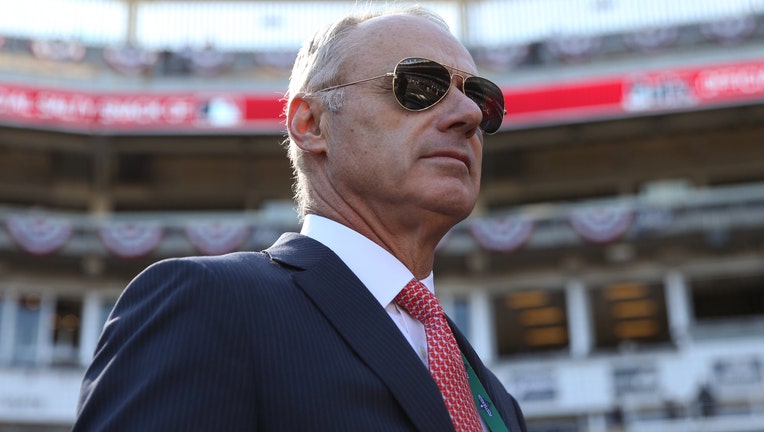 BRONX, NY - OCTOBER 15: Major League Baseball Commissioner Robert D. Manfred looks on prior to Game 3 of the ALCS between the Houston Astros and the New York Yankees at Yankee Stadium on Tuesday, October 15, 2019 in the Bronx borough of New York City

NEW YORK - The chance that there will be no Major League Baseball season increased substantially Monday when the the commissioner's office told the players' association it will not proceed with a schedule unless the threat of legal action by the union is resolved.

MLB informed the union it would announce a schedule and a date for the resumption of spring training if the union agrees to waive claims that MLB violated the March 26 agreement between the sides or if the union agreed to an expedited grievance procedure. MLB said absent a solution, the dispute would remain an impediment to starting play.

With MLB owners and players at odds, the future of the 2020 season is murky.

MLB's action was described to The Associated Press by a person familiar with the details who spoke on condition of anonymity because no announcement was authorized.

Baseball Commissioner Rob Manfred said ahead of last week's amateur draft that the chance of a season was "100%."

"I can tell you unequivocally we are going to play Major League Baseball this year," he said on ESPN's draft broadcast.

He reversed his position Monday when he was among commissioners of the major U.S. professional leagues who were interviewed by ESPN.

"I'm not confident. I think there's real risk; and as long as there's no dialogue, that real risk is going to continue," Manfred said. "The owners are 100% committed to getting baseball back on the field. Unfortunately, I can't tell you that I'm 100% certain that's going to happen."

"It's just a disaster for our game, absolutely no question about it," Manfred said. "It shouldn't be happening, and it's important that we find a way to get past it and get the game back on the field for the benefit of our fans."

MLB has made three economic offers, the last on Friday offering to guarantee players 70% of their salaries as part a 72-game schedule beginning July 14 and increasing the total to 80% if the postseason is completed.

Players previously offered two proposals, holding their position that no additional pay cuts were accepted beyond the prorated salaries for 2020 that they had agreed to on March 26. Union head Tony Clark said Saturday that additional talks appeared "futile."

Manfred had threatened a shorter schedule, perhaps of about 50 games. The union could respond by filing a grievance that would be heard by arbitrator Mark Irvings, arguing players are owed hundreds of millions of dollars in damages due to a shorter season.

In their March agreement, the sides vowed to "work in good faith to as soon as is practicable commence, play, and complete the fullest 2020 championship season and post-season that is economically feasible, consistent with" a series of provisions.

Absent Manfred's consent, the agreement said, the season would not begin unless there were no travel restrictions in the U.S. and Canada impacting play, no restrictions on mass gatherings at all 30 regular-season ballparks and no health or safety risks in playing in front of fans at the regular stadiums. But it also provided that the sides "will discuss in good faith the economic feasibility of playing games in the absence of spectators or at appropriate substitute neutral sites."

MLB told the union it would lose an additional $640,000 for each regular season game played and does not want to extend the regular season past Sept. 27 because it fears a second wave of the coronavirus could endanger the postseason, when $787 million of broadcast revenue is earned.