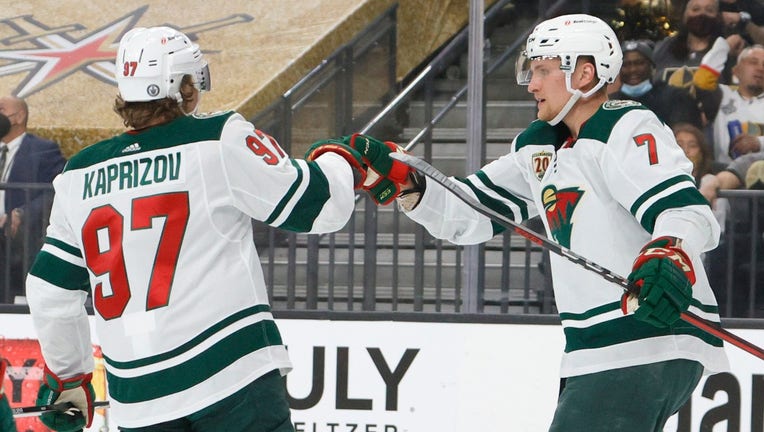 Kirill Kaprizov #97 and Nico Sturm #7 of the Minnesota Wild celebrate after Kaprizov scored a first-period goal against the Vegas Golden Knights in Game Five of the First Round of the 2021 Stanley Cup Playoffs at T-Mobile Arena on May 24, 2021 in Las ((Photo by Ethan Miller/Getty Images))

MINNEAPOLIS - The Minnesota Wild headed home from Vegas Tuesday morning, and they kept their season alive for at least one more game after a 4-2 victory over the Golden Knights.

After scoring just four goals in the first four games, and getting shut out on Saturday, the Wild got three first period goals and added an empty-netter with 37.5 seconds to play to seal the Game 5 win. The goals came from Kirill Kaprizov, Zach Parise, Jordan Greenway and Nico Sturm. They got the win despite being out-shot 40-14 for the game, including a 22-1 barrage in the second period.

After struggling to score through four games, Dean Evason liked the team’s approach Monday night. Both Parise and Greenway scored rebound goals, and Kaprizov scored on a feed from Mats Zuccarello. They took a more workmanlike approach, rather than try to make a highlight reel play.

"We like how we scored our goals. We got to the net, we scored dirty goals, we got a bounce. We’ve talked about that the whole series, that we are getting those looks, we just didn’t get that bounce or that break. We did last night, we have to continue to push to do that," Evason said Tuesday before the team flew home.

Now, the Wild is one win away from making the series very interesting and forcing a decisive Game 7 Friday night. The Golden Knights also happen to be the most recent team to lose a series after leading 3-1.

But the Wild has to win Game 6 at Xcel Energy Center Wednesday night. So far, the road team has won four of the five games in the series.

"We’re not going to start dreaming about winning the series until we get it done. This was a great first step in that process,’ defenseman Ian Cole said.

"One hundred percent we worry about us. We worry about what they do on the ice and how we can stop them and try to score goals, but as far as their mental outlook, we’re worried about how we conduct ourselves, how we prepare and that’s our priority," Evason said.

Kaprizov scored his first career playoff goal, and Parise appeared to get some weight off his back with his first goal of the series. It gave the Wild a 2-1 lead in the first period, and Parise had a little extra celebration after.

It’s been a frustrating year for the veteran, who missed time on the NHL’S COVID-19 List, was a healthy scratch twice earlier this season and was scratched for the first three games against the Golden Knights. He was inserted in Game 4 after winger Marcus Johansson going down with a broken arm.

"Whoever is in the lineup plays the game. We have to make decisions of who is in the lineup, we expect everybody to be prepared. Zach played an extremely good game last night. So happy for him, but most importantly for the team," Evason said.

After losing 5-2 and 4-0 to the Golden Knights at Xcel Energy Center earlier in this series, the Wild need another win Wednesday in an elimination game.

The Wild was one of the best home teams in the NHL in the regular season, but now they have to defend their home ice with the season on the line. That’s just to earn a chance to play Game 7.

"We’ve talked all the time about it doesn’t matter who, where, when, we’re going to play hard. We obviously need to apply that tomorrow night when the puck is dropped," Evason said.