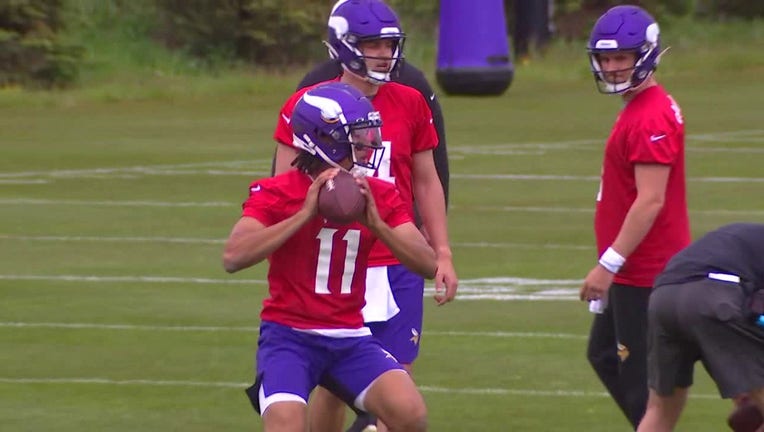 MINNEAPOLIS - For the first time since playing in the Senior Bowl back in January, Kellen Mond put pads on this week at Minnesota Vikings training camp at TCO Performance Center.

The Vikings wrapped up camp Thursday with the second of two joint practices against the Denver Broncos. Mond was back on the practice field on Tuesday after spending 10 days on the reserve/COVID-19 list. Mond tested positive, and because Kirk Cousins and Nate Stanley were considered close contacts, they had to quarantine for five days as well.

That left Jake Browning as the only quarterback available for the night practice at TCO Stadium. Mond, a rookie and third round pick out of Texas A&M, thought the diagnosis might have been a false positive.

"It was really frustrating, especially when I found out I had tested positive. I wasn’t sure if it was a false positive or not. Knowing I had to sit out 10 days, it definitely hurts," Mond said. "Can’t dwell on what’s happened in the past and just look forward to getting better."

In his time away, Mond attended team meetings virtually and dove into the playbook. He worked out when he could, saying days two through four having the virus were the toughest for him. He compared it to when he had the flu as a kid.

"I did as much as I could with what I had. I’m just glad to be back out here," Mond said.

While Mond participated on the field this week, he’s unlikely to play in the first preseason game against the Broncos on Saturday at U.S. Bank Stadium. That leaves Kirk Cousins, Jake Browning and Danny Etling as the available quarterbacks.

"He needs to pick up the tempo. Everything is like it’s in slow motion a little bit," Zimmer said.

Mond’s positive case had Zimmer frustrated last week, urging his players to get vaccinated for COVID-19. The team has one of the lowest player vaccination rates in the NFL, and testing positive during the season could force key players to miss games or worse, having to forfeit if there’s an outbreak within a team caused by a non-vaccinated player.

"Obviously him, a person who is vaccinated, has their opinion of wanting players to get vaccinated to protect the team. I think everyone has their own personal reasons, so it’s pretty much everybody’s own opinion," Mond said.

So where does he stand on the vaccine?

"I’ve talked to people around me who I trust. I think it’s been a little bit more in the conversation since I’ve had COVID, but those are personal things. Everyone is entitled to their own opinion," Mond said.