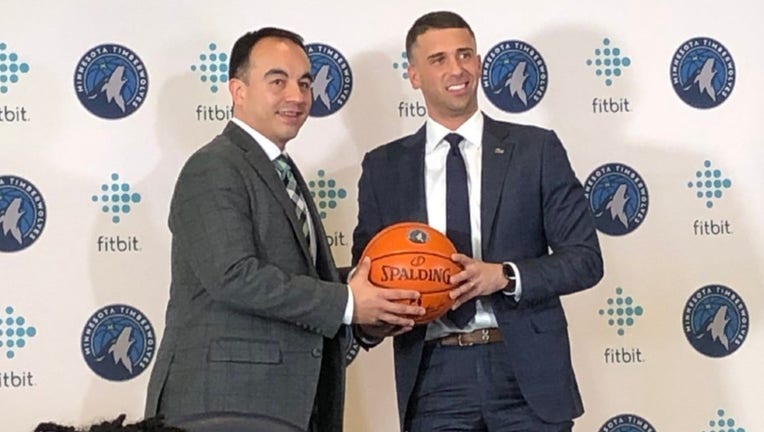 MINNEAPOLIS - The Minnesota Timberwolves will have the No. 1 pick in the 2020 NBA Draft after winning the draft lottery Thursday night.

The Wolves have not won the NBA Draft Lottery since 2015, when they got the No. 1 overall pick and selected star forward Karl-Anthony Towns. The Golden State Warriors got the No. 2 overall pick, followed by the Hornets at No. 3. It's the first time the Wolves have ever moved up in the NBA Draft Lottery. They had the top odds to land the top pick when they drafted Towns in 2015.

"For our organization, for our group, it’s incredibly important. It’s another step forward, it’s being in control of the draft and being able to maximize our position. We're fortunate, catching breaks are important in order to have a successful organization and this is a big break for us," Timberwolves President of Basketball Operations Gersson Rosas said Thursday night. "There’s a lot of steps left in this journey for us, but today was a significant one. We’re excited about the potential level of player that we can add to our organization, but at the same time, we’re going to be very aggressive and we’re going to look at every avenue to improve this team. This allows us to take a major step in terms of a talent acquisition."

The NBA Draft Lottery was done remotely, as have many other sporting events, due to the COVID-19 pandemic. Rosas, coach Ryan Saunders and the executive staff that were in town gathered at Mayo Clinic Square to watch the lottery. They erupted after seeing the Warriors get the No. 2 pick, knowing they won the No. 1 overall selection.

The Wolves were represented in the draft lottery by point guard D’Angelo Russell, the key piece of a massive roster overhaul acquired last year before the NBA trade deadline. Russell was actually the No. 2 overall pick behind Towns in the 2015 NBA Draft.

“I’m glad I could represent for the state of Minnesota at the draft lottery the same way we plan to show out for our fans when we get back on the court,” said Timberwolves guard D’Angelo Russell in a statement. “The No. 1 pick is exciting to have, it makes me think back to when Karl and I got drafted 1,2 in the 2015 draft. There’s so much buzz and energy during the draft as a player and I really look forward to seeing what Gersson and the front office will do to build upon our 2020-21 roster with this pick. I know we’re ready to compete and I can’t wait to see who joins us next.”

"Karl-Anthony Towns deserves a major assist. When he and I spoke, he wanted D’Angelo to be the guy that represents us. That’s why we brought D’Angelo here, he’s one of the faces of our organization. He’s a closer, as he showed tonight. This is what it’s all about," Rosas said.

The consensus top three players in the NBA Draft are Anthony Edwards out of Georgia, LaMelo Ball, a top high school prospect who played overseas last year and James Wiseman, a forward out of Memphis.

Minnesota finished the 2019-20 season with a 19-45 record, second-worst in the Western Conference, and was not invited to Orlando for the NBA's return after the season was postponed on March 11 due to the COVID-19 pandemic.