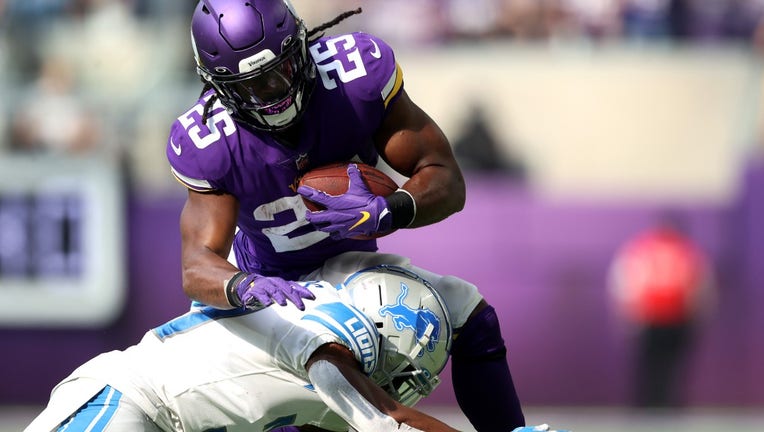 Alexander Mattison #25 of the Minnesota Vikings runs the ball during the first half against the Detroit Lions at U.S. Bank Stadium on October 10, 2021 in Minneapolis, Minnesota.  ((Photo by Elsa/Getty Images))

MINNEAPOLIS - The Minnesota Vikings are 2-3 after a 19-17 win over the Detroit Lions on Sunday that was far closer than it needed to be, and it was a classic ugly win.

The Vikings head to Carolina this Sunday, where a win puts them at 3-3 heading into their bye week. A loss to the Panthers, and they’re 2-4 with plenty of questions to answer and 11 games left to fight for a playoff spot. Here are takeaways from the team’s 2-3 start.

The Vikings celebrated a win over the Lions Sunday.

DID BEATING LIONS SAVE THE VIKINGS SEASON?

The postgame scene would’ve been an entirely different picture had the Vikings not put together a drive with 37 seconds left to kick the game-winning field goal against the Lions. There’s no way around it, losing to a winless team at home as 10-point favorites not only would’ve been embarrassing, it would’ve provided the fuel for speculation on the futures of Mike Zimmer and the coaching staff.

There was nothing pretty about it, but if the Vikings end up making the playoffs, maybe the Vikings coming back to beat the Lions was the spark the franchise needed.

"Well it’s a win. I think the good thing about it is that we’re not all happy about how we won," Vikings coach Mike Zimmer said Monday.

The Vikings are 2-3 for a myriad of reasons, but it can be argued Kirk Cousins is playing some of the best football of his career. Cousins passed for 275 yards and a touchdown against the Lions. He’s led the offense to potential game-winning drives against the Bengals, Cardinals and now the Lions. He also gave them a chance to force overtime against the Browns. Cousins has 10 touchdowns and just two interceptions through five games. He’s averaging 279 yards per game, the second-highest of his career. The Vikings’ struggles through five games are largely not on Cousins.

WHAT’S WRONG THE WITH RUN DEFENSE?

Mike Zimmer said before facing the Lions he’s not concerned about the Vikings’ run defense. Quite frankly, he should be. Through five games, the Vikings have allowed 650 rushing yards, and 4.7 yards per carry. Michael Pierce is hurt, and that doesn’t help matters. Sunday, D’Andre Swift went un-touched for a 7-yard touchdown that allowed the Lions to take a late lead. That can’t happen in a huge spot like that. Zimmer takes pride in his run defense, and it’s got to get better the rest of the season.

VIKINGS ARE 2-0 WITHOUT DALVIN COOK

In probably the weirdest stat of the 2021 season so far, the Vikings are 2-0 went Dalvin Cook doesn’t play. Cook missed the home opener with a bad ankle, and Alexander Mattison went for 171 total yards in a 30-17 win over the Seahawks. Sunday, Mattison had 154 total yards, 113 on the ground and the Vikings’ only offensive touchdown of the game. Make no mistake, Cook is one of the Vikings’ top offensive weapons and will carry the load in the run game when healthy. But so far this season, they’re 0-3 when he’s on the field. Chalk it up to a weird circumstance.

WHAT’S WITH THE OFFENSIVE PLAY-CALLING?

The Vikings have plenty of play-makers on offense, so some of the struggles moving the ball and scoring through the first five games are puzzling. Sunday, the Vikings had 41 seconds and two timeouts to try to get points before halftime. Mattison ran for a short gain before they ran the clock out, and fans booed.

The Vikings ran six times on 2nd-and-8 or longer, and totaled 12 yards. There’s nothing more frustrating for fans than a 2nd-and-long run that doesn’t work. They spent most of the second half Sunday booing the conservative play-calling, and they’re not wrong. The Vikings don’t have a second half offensive touchdown since Week 1, and that has to change.

Mike Zimmer’s lack of patience with kickers is well-chronicled. Have the Vikings found their guy in Greg Joseph? Sunday, Joseph redeemed himself for a fourth quarter miss and for his Week 2 miss at Arizona with a 54-yard field goal as time expired for a walk-off win. Joseph made four field goals to help beat the Lions, and he’ll be relied on again with the game on the line before the season is over.

Christian Darrisaw saw time on special teams against the Cleveland Browns, but made his offensive line debut in Sunday’s win over the Lions. He played in one series in the second quarter, and got extensive time in the second half. He didn’t allow any pressures on Kirk Cousins, while Rashod Hill struggled. So will Darrisaw soon be starting? Mike Zimmer said slow down, he’s only had 13 practices. It’s something to watch the rest of the season.

The Vikings face the Panthers on Sunday in a game that could tell a lot about the team’s future, regardless of the outcome.