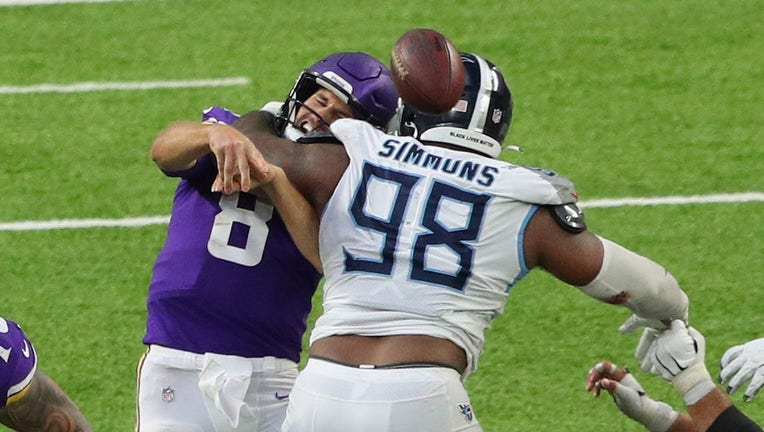 MINNEAPOLIS - The Minnesota Vikings are on their bye week, and the season is in shambles after a 1-5 start.

The most surprising of all performances came Sunday, a 40-23 loss to the winless Atlanta Falcons at U.S. Bank Stadium. The Vikings trailed 20-0 at half after three Kirk Cousins interceptions. Only one other team in recent memory has started 1-5 and made the playoffs: The 2018 Indianapolis Colts, who finished 10-6.

The Vikings are missing key players, not getting good quarterback play and have one of the worst pass defenses in the NFL. So where does the season go? Here’s five questions facing the Vikings in the final 10 games.

Will Danielle Hunter be back?

The Vikings have plenty of elephants in the room, but the biggest might be Danielle Hunter. The star defensive end has not practiced since Aug. 14, training camp, and is nowhere to be found while the team practices. He’s on injured reserve, and while the team has not said what his injury is, reports indicate he has a herniated disc in his neck. He reportedly went to New York for a medical opinion, and those closest to him are telling him to have surgery and miss the season.

Hunter had 14.5 sacks last season and wants to play, but is it worth it after a 1-5 start? Even in an expanded format, it’s unlikely the Vikings make the postseason. It might be in his best interest to get healthy and reset for 2021.

Will Kirk Cousins get benched?

Kirk Cousins had one of his worst halves of football with the Vikings last Sunday, and that’s saying something. His three first half interceptions led to 17 Falcons’ points. He leads the NFL with 10 interceptions, and his only option after the loss was to take responsibility. People on social media were calling for Cousins to be benched.

Would the Vikings actually sit him? The answer is absolutely not. He came to Minnesota on a 3-year, $84 million fully-guaranteed contract. He signed a two-year extension before this season, worth $66 million and most of it is guaranteed. Sorry Vikings fans, Sean Mannion and Jake Browning aren’t playing any time soon. Cousins is only coming out if he gets hurt, and no, he won’t be traded. It’s highly unlikely they would find a team to take on that contract. Simply put, Cousins has to play better.

What happens with the offensive line?

A hot button topic with the Vikings the last several years has been the offensive line. It’s a mess in pass protection right now, and the group has been inconsistent all season. Pat Elflein is on injured reserve, and Dru Samia missed Sunday’s game. Ezra Cleveland got his first NFL start on Sunday, and had his good and bad moments. Kirk Cousins has been sacked 14 times in five games, though it feels like a lot more than that. The Vikings are still averaging five yards per carry, thanks to Dalvin Cook. But across the board, the Vikings need more from their offensive line.

What about Mike Zimmer’s vaunted defense?

Mike Zimmer has always been known as a defensive coach, but this year has been especially difficult with multiple starters out. No Danielle Hunter, Anthony Barr, Michael Pierce, Mike Hughes, Holton Hill and Kris Boyd. He’s relying on rookies in the secondary with Jeff Gladney, Cameron Dantzler and Harrison Hand. The defensive line isn’t generating a push, or getting pressure on quarterbacks. The Vikings are one of the worst pass defenses in the NFL, allowing 286 yards per game and 68.2 percent of passes to be completed. They’ve allowed 14 passing touchdowns, third-worst in the NFL.

If the Vikings are going to make any improvements the last 12 games, it starts up front.

Do the Vikings move on from Rick Spielman/Mike Zimmer after the season?

The short answer is it’s unlikely. Vikings owners Mark and Zygi Wilf love the duo of Mike Zimmer and Rick Spielman, enough that they each got two-year contract extensions in the off-season. They have enough injuries to key players that there’s not a lot Zimmer can do the rest of the season. Spielman probably could’ve done more to fill the Vikings’ holes on defense in the off-season, but it’s tough to gauge this season without a fully-healthy roster.

If the Vikings were going to move on from Zimmer, it would’ve happened Monday. It’s on the players to play better, be professionals and earn the wins.

The Vikings are 1-5, and head to Green Bay out of the bye. They still have the Detroit Lions and Chicago Bears twice, face the Dallas Cowboys without Dak Prescott and struggling Jacksonville and Carolina squads.