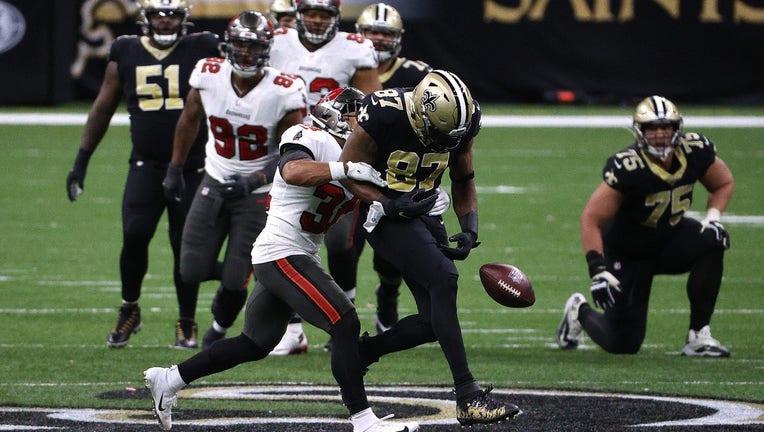 Antoine Winfield Jr. #31 of the Tampa Bay Buccaneers strips the ball to cause a fumble by Jared Cook #87 of the New Orleans Saints during the third quarter in the NFC Divisional Playoff game at Mercedes Benz Superdome on January 17, 2021 in New Orlea ((Photo by Chris Graythen/Getty Images))

MINNEAPOLIS - The University of Minnesota football program will be well-represented when the Green Bay Packers host the Tampa Bay Buccaneers Sunday afternoon for a trip to the Super Bowl.

Antoine Winfield Jr., Tyler Johnson and Kamal Martin will all play in their first NFC Championship Game as a rookie. Winfield and Johnson both made impactful plays as the Buccaneers beat the Saints 30-20 in New Orleans on Sunday.

Winfield finished with six tackles, and forced a fumble on Jared Cook that Tampa Bay turned into a touchdown. That came just a few players after nearly intercepting a Drew Brees pass. Winfield has been one of the top defensive rookies in the NFL this season, with 94 tackles, two forced fumbles, one interception and six passes defended.

Johnson had one catch for 15 yards, but it was a crucial play to convert a 3rd and 11 in the second half for the Buccaneers on a back shoulder throw. Johnson has played in 14 games, and has 12 catches for 169 yards and two touchdowns.

Martin has been in and out of the Packers’ defensive lineup throughout the season as he’s battled injuries. He did not record a tackle in Saturday’s win over the L.A. Rams, but did play four defensive snaps and 16 on special teams. For the season, Martin has 24 tackles in 11 games.

The Packers host the Buccaneers Sunday afternoon for the NFC title.

Former Gophers linebacker Damien Wilson will also be playing for the Kansas City Chiefs in the AFC Championship Game on Sunday. Wilson had four tackles and one pass defended as the Chiefs beat the Cleveland Browns 22-17.