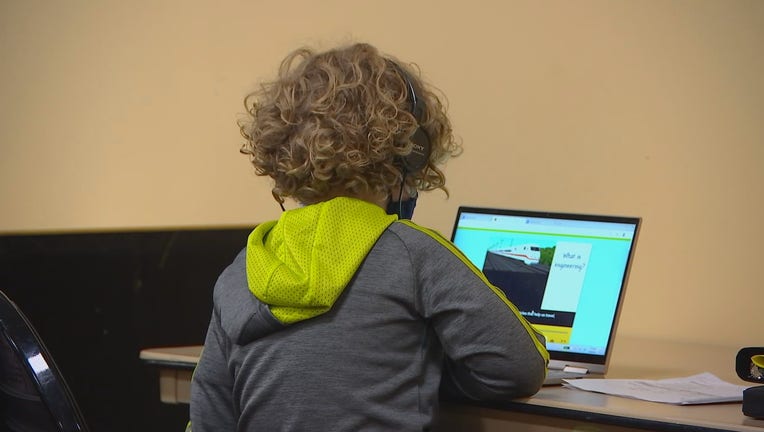 A student learns from YMCA Southdale on an unprecedented first day of school in Minnesota.

MINNEAPOLIS (FOX 9) - Tuesday marked day one for a lot of Minnesota students, but back to school varied depending on the school district.

Many of those students were there for school and YMCA staff were on hand to help facilitate that.

18 total students K-5 gave their schedules to staff and sat down to start the school day Tuesday.

“We’ve had some stumbles along the way as far as learning passwords and learning user names, but I’ve been on the phone with several teachers and parents throughout the morning just to make sure all the Ts and Is are set up,” said Jake Langevin, the YMCA site director.

The same practices are going on at 19 YMCA locations, involving 14 different Minnesota school districts. The expectations for each student are different.

“Some kids are requiring students to sign on and be present at their computer at 7:30 in the morning. Others are at 9 o’clock. Others are just saying, just finish the assignment and put it into the format that we asked,” said Stephanie Chauss, senior VP of Operations for the YMCA.

While it is a lot to track, staff is forming partnerships with parents and teachers. Communication is key to making it work.

“Everyone is aware that it’s a group effort it takes a village mentality,” said Langevin.

Academics are only part of the equation. The YMCA sees social connections as a crucial part of the day, too.

“The other piece is that they get to go to the gym and eventually they’ll get to go swimming if that’s something they choose they’ll do art, they’ll get outside with friends, all of it will be COVID safe, of course, but all of this is a way for parents to feel good about this distance learning model,” said Chauss.

While there may have been some jitters before the day started, staff says it was mostly parents. The kids are making it work.

“I have seen some really amazing things happen with the kids just taking what’s thrown at them and being OK,” said Langevin.

While there is a cost to attend, the YMCA works with families so that no child is turned away.