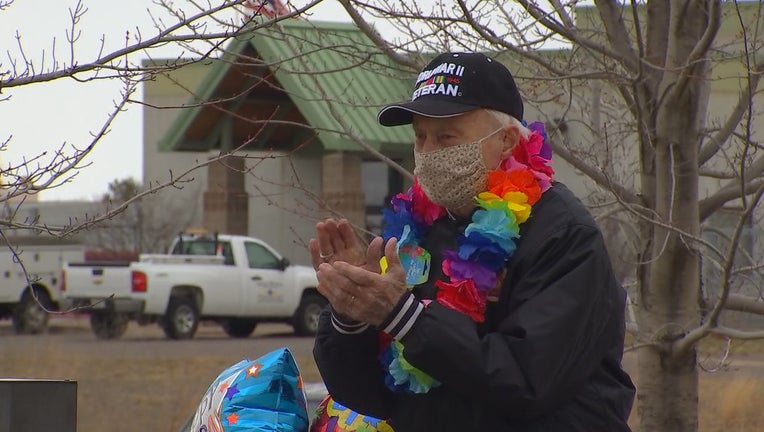 NORTH BRANCH, Minn. (FOX 9) - From weddings to birthdays, stay-at-home orders have put a lot of gatherings and parties on hold. But, people are still finding ways to celebrate and show up for one another.

When you've been alive for a century, every day is precious. But for Harley Johnson of Rush City, Tuesday was more special than most.

For Harley's 100th birthday, his family had to postpone the big bash they were planning at the Rush City VFW because of the stay at home order.

So, Harley's children, grandchildren and great grandchildren got together at a safe distance outside his assisted living facility in North Branch.

“We just love him and adore him, and we wanted him to know that," said Harley's daughter-in-law, Monda Lind.

In addition to Harley's fellow veterans giving him a few certificates and awards, about a dozen emergency vehicles from nearby police and fire departments lined up with lights and sirens going to give him a drive-by parade.

“We haven't done anything like this before, but I guess we're learning, I guess things are going to be so different now,” said Richard Ordner with American Legion Post 93.

Johnson served in World War II where he was wounded at Utah Beach in Normandy before returning to the states where he married and raised a family.

But, living through a different kind of war that is fought with social distancing and isolating the most vulnerable is not without its casualties, too.

“It’s very emotional. I just thought, gosh, wouldn't it be nice to give him a big hug, but he knows that we love him and that's the most important part," Lind said. “Coronavirus has stolen a lot from all of us, but we have hope and we're going to get through it."