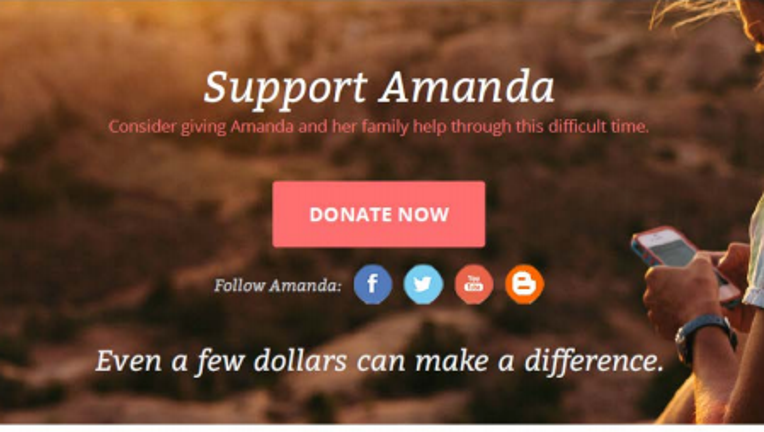 The IRS says that Amanda C. Riley pretended to have cancer to solicit donations.

SAN JOSE, Calif. - A Gilroy woman has been charged with soliciting more than $60,000 in donations she asked for on Facebook and her blog to help pay for cancer treatments she did not need or receive, and then used the money for herself, according to federal prosecutors and the Internal Revenue Service.

Amanda C. Riley was charged in U.S. District Court in Northern California with wire fraud on Monday. In all, from October 2012 to February 2016, Riley received 447 online donations totaling $60,272.43 though her 'Support Amanda' page alone, prosecutors allege.

Riley has not yet entered a plea and she has no attorney on record. Efforts to immediately reach her were unsuccessful.

According to the complaint, Riley claimed to have Hodgkin’s lymphoma, and then lied to people that she was receiving cancer treatment at hospitals, including Kaiser Permanente, City of Hope National Medical Center, Johns Hopkins Hospital, Columbia University Hospital, and UCSF Medical Center. The complaint only mentions one victim, L.B., who paid Riley $1,000 to help her pay for her treatments.

The complaint alleges that, in reality, Riley did not have Hodgkin’s lymphoma and had not been diagnosed with or treated for that disease or any other type of cancer.

Riley also detailed her "purported" illness on social media, including on Facebook, Instagram, Twitter, and her blog, and used her so-called cancer to receive donations she claimed would help pay for her medical expenses, prosecutors allege. Her blog and Facebook accounts have been deactivated.

For example, Riley’s blog included numerous bogus photos depicting such things as her supposedly receiving cancer treatment at hospitals, her medications, her friends and family wearing “Team Amanda” bracelets and gifts she received from supporters.

The blog also contained numerous references to fundraisers that were held for her benefit.

Once, Riley claimed she traveled to New York City to receive cancer treatments and asked for donations to help defray her travel costs, prosecutors allege.  In September 2013, her blog added a link to a support page, http://www.supportamanda.com, which is now an online site called True Crime Daily.  The support page enabled people to donate money online.  Prosecutors say Riley then altered a doctor’s note to read that she was “in treatment for cancer.”

Other people who became aware of Riley’s campaign also organized fundraisers on her behalf.

Some of them included a Facebook challenge; a CrossFit fundraiser; a Christmas ornament sale fundraiser; a quilt raffle; a Chili’s Grill & Bar fundraiser; and the auction on eBay of various items, including an electric guitar autographed by American country music artists such as John Michael Montgomery and LeAnn Rimes.

If convicted, Riley faces a maximum statutory penalty of up to 20 years in prison and a fine of $250,000 or twice the gross gain or loss resulting from the scheme.

Riley’s is scheduled to appear before Judge Susan van Keulen on Aug. 27.

If anyone has information about this case, they can email OaklandFieldOffice@ci.irs.gov