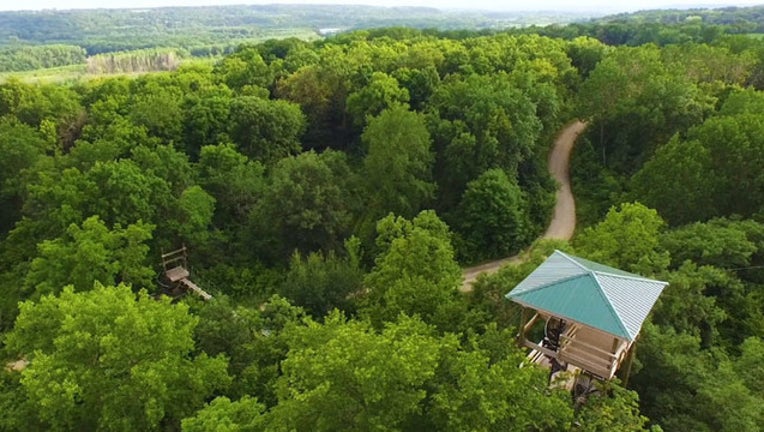 HENDERSON, Minn. (FOX 9) - A 21-year-old Shakopee, Minnesota woman was injured after she attempted to use a zip line near Henderson Saturday.

According to the Sibley County Sheriff’s Office, the woman broke into Kerfoot Canopy Tour after business hours Friday night and tried to use the zip line on her own. She was unable to slow her speed on the course and sustained some minor injuries.

The woman called 911 around 12:07 a.m. because she could not get down from the zip line platform on her own.

Belle Plaine and Shakopee fire departments responded to the scene. Firefighters used a firetruck with a ladder to help the woman get off the platform and back to the ground.

She refused medical treatment for her injuries, the sheriff's office said.

Lee Kerfoot, owner of Kerfoot Canopy Tour, said he did not know the woman and he does not know exactly how she broke into the property. "On Friday night and Saturday morning, we had an unexpected guest," Kerfoot told FOX 9. "They broke into our property. They went for a joyride on our zip line tour and they got stuck."

This is the first time such an incident has occurred at Kerfoot Canopy Tour, he said.

Kerfoot said he plans to change some of the security measures at his business to prevent incidents like this from occurring in the future.

"Thankfully, there were no injuries and we're really grateful for the first responders," he said. "It's unfortunate."