Will you get a second coronavirus stimulus check?

President Trump has previously signaled that he supports sending a second round of direct cash payments to Americans.

WASHINGTON - As a recent coronavirus resurgence threatens to derail the U.S. economy's gradual recovery from the worst downturn since the Great Depression, the spike in cases has put added pressure on Congress to pass another round of fiscal aid.

What the next stimulus bill will look like remains unclear, but certain measures that have gained traction over the past month include another stimulus check, additional aid for businesses and the unemployed, a back-to-work bonus and liability protections for employers.

Expect economic data -- like the Labor Department's June jobs report, which showed employers added a record 4.8 million jobs last month and the unemployment rate fell to 11.1 percent -- to play a pivotal role in what the legislation ultimately includes.

"The upbeat headline may embolden policymakers who don't want to provide more fiscal support for businesses and workers," Josh Wright, the chief economist at iCIMS and a former Federal Reserve staffer, said Thursday.

White House officials maintained the need for additional aid following the release of the report. Close to 48 million Americans have lost their jobs as a result of the outbreak and subsequent economic lockdown, a rate unseen since the Great Depression.

Still, the Trump administration has said it does not intend to pass more relief measures until at least the beginning of July. The Senate is not scheduled to return from its two-week summer recess until July 20, making it unlikely that a fourth relief package is passed before then.

Treasury Secretary Steven Mnuchin and White House economic adviser Larry Kudlow both said Thursday that another direct cash payment is still on the table in the next aid package.

"Direct checks are probably going to be part of it, as far as the president is concerned right now," Kudlow said.

Over the past week, President Trump has vocalized his support for a second stimulus check, although it's unclear how much money Americans may receive and when the checks could go out. 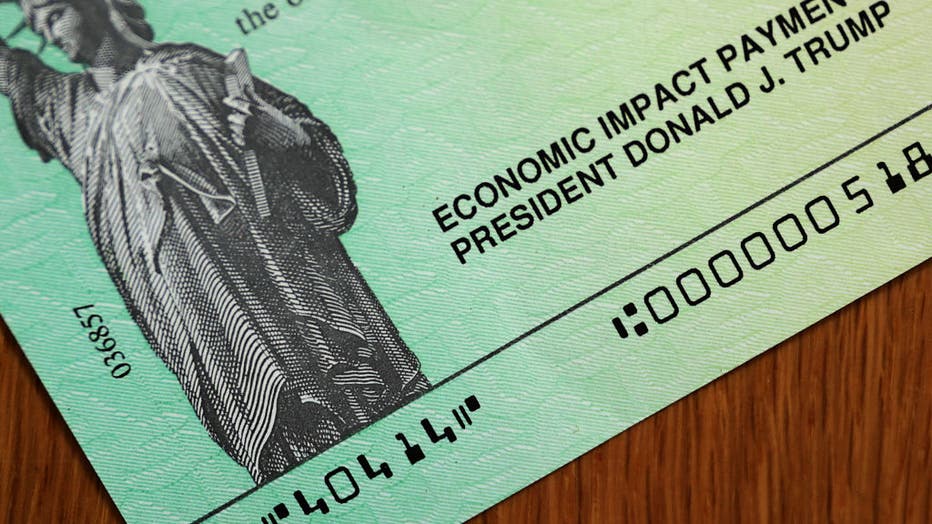 U.S. President Donald Trump's name appears on the coronavirus economic assistance checks that were sent to citizens across the country April 29, 2020 in Washington, DC. (Photo by Chip Somodevilla/Getty Images)

“I support actually larger numbers than the Democrats, but it’s got to be done properly,” Trump said during a Wednesday interview with FOX Business' Blake Burman. “I want the money getting to people to be larger so they can spend it. I want the money to get there quickly and in a non-complicated fashion.”

The only proposal that’s been passed by either chamber of Congress is the HEROES Act, the massive $3 trillion relief package put forward by House Democrats. Among other things, it includes a second one-time payment of up to $1,200 to some Americans. However, the legislation has stalled in the Republican-controlled Senate.

Some Republicans have voiced concern that extra unemployment benefits of $600 a week are actually discouraging workers from returning to their jobs. The sweetened benefits are set to expire at the end of July.

Texas Rep. Kevin Brady, the top Republican on the House Ways and Means Committee, proposed a bill to give recipients of unemployment benefits who go back to their jobs a one-time lump payment of $1,200, or two weekly payments of $600.

Another proposal from Sen. Rob Portman, R-Ohio, would provide $450 weekly to laid-off Americans returning to work, in addition to their wages. In both cases, the money would last through July 31, the same date on which the extra $600-a-week unemployment benefit expires.

The idea of a back-to-work bonus has also gained traction among some White House officials, who have voiced support for reforming unemployment benefits in the next aid package.

"We've got to reward individuals for coming back to work," Kudlow said recently. "There will be some kind of re-employment bonus. We're not going to go to the $600, that's a disincentive to work."

The extra $600 per week in jobless aid officially expires on July 31, but because states will only pay the extra cash through the week ending July 25 or July 26. Without it, benefits will revert to the standard $378 per week -- an income reduction of roughly 60 percent.

House Democrats want to continue the extra $600-a-week payment beyond July. In the $3 trillion HEROES Act, they proposed extending the $600 payments until at least the end of January. The bill also offered a so-called “soft cutoff,” which would give the extra money to individuals who needed it through March 2021.

The benefits would drop by $100 for every 1 percentage point it fell below that, until unemployment was below 6 percent in that state. The idea is to "gradually phase-out" the need for the relief, Schumer wrote, and avoid a fiscal cliff.

Still, Republicans are unlikely to back expanded unemployment benefits.

"Unemployment is extremely important. And we need to make sure, for those who are not able to recover their jobs, unemployment is adequate," McConnell told reporters this week. "That is a different issue from whether we ought to pay people a bonus not to go back to work. And so I think that was a mistake. And we're hearing it all over the country that it's made it harder actually to get people back to work."

Kudlow told FOX Business on Thursday the administration is also exploring a payroll tax holiday for workers -- something Trump has been pushing for since the start of the pandemic -- business deductions for things like restaurants, entertainment and sightseeing, as well as liability protections for businesses.

"It's a large-scale package," Kudlow said.