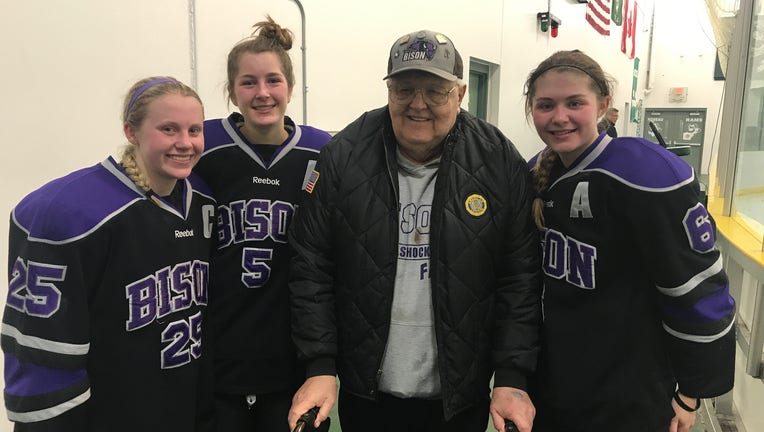 BUFFALO, Minn. (FOX 9) - The city of Buffalo, Minnesota is remembering a man killed in a car crash just before 10 p.m. Tuesday. Gary Wagner, 80, had a big impact on Buffalo youth sports for decades, but now, family, friends and the community are grieving.

The ice, the bleachers, the concessions and Gary Wagner are what you had come to expect at the Buffalo ice arena. Gary’s death is a huge loss to all the lives he touched on a daily basis.

Well-known youth hockey supporter killed in crash near Buffalo, Minn. while on his way home from game

The next home hockey game for the Buffalo Bison will likely feel a little empty even if it’s a packed house. The team’s number one fan –  the man who had his name nailed down inside the rink – suddenly passed away Tuesday.

“With all his health issues, I truly believe it’s what’s kept him alive as long as it has - the love of sports,” said Ross Wagner, Gary’s son.

Wagner was on his way home from a boys hockey game in St. Michael when police say a car going the opposite direction on County Road 35 crossed the center line and hit Wagner’s van head-on. He was killed almost instantly.

It was a shocking and painful call for his three children to receive, but they’re comforted knowing he had just been where he was happiest: at a hockey rink.

“He would talk with the kids, he would be at all the games. He got to know the kids and support ‘em,” Ross said.

Wagner supported all Buffalo youth sports - hockey, fastpitch, football and more - rolling up on his red scooter to games, ready to cheer on the kids and yell at the refs if need be.

“Throughout the years, he’s always done hockey medals for the seniors, and all he asks is that you give back to the community,” said Rondi Wagner Reinert, Gary’s daughter.

Gary was a four-time cancer survivor. He survived a heart attack, a quadruple bypass, and even a Jeep crash back when he was in the Army.

His kids said that in addition to all Buffalo youth sports, he hardly missed a game his grandkids were playing in - who don't all live in Buffalo.

The other driver, a 26-year-old Wisconsin woman, was trapped in her vehicle and the fire department had to extricate her. She was flown to Hennepin County Medical Center with multiple injuries. No arrests have been made.