Members of the National Nurses United union held up photos of the deceased in hopes that the images would resonate with federal and state leaders.

On Tuesday, members of the National Nurses United union placed 164 white pairs of shoes on the U.S. Capitol front lawn to symbolize the number of nurses who have died due to contracting COVID-19 while fighting the novel coronavirus on the front lines.

“Yesterday’s action in Washington, D.C. was to honor the lives of 164 registered nurses who have died because of COVID-19,” Zenei Cortez, president of National Nurses United and the California Nurses Association, said. 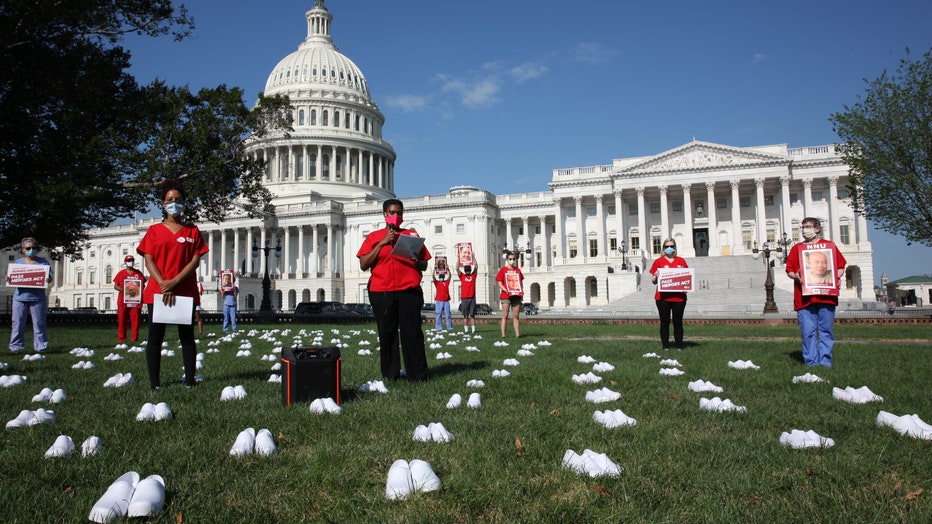 Nurses stood on the U.S. Capitol lawn to remember the 164 nurses who died while fighting COVID-19.

“We wanted the shoes to symbolize a life,” Cortez continued. “Now, they’re empty because that person, that nurse who would have been wearing that pair of shoes, is now gone. We wanted that picture to resonate to a lot of the elected officials that, if only we were protected at the very beginning, those shoes would still be filled, now.”

During the demonstration on the morning of July 21, registered nurses gathered at the Capitol to honor the lives of those nurses by reading off 164 names, according to NNU’s Facebook post.

Cortez said she believes that the 164 reported deaths due to COVID-19 are likely not the true number of nurses lost.

“The number that we have, the 164 nurses who have lost their lives due to COVID-19, it is under-reported because there is no tracking method of the government or any regulatory agency to track the deaths,” she said. “The actual cause of death and the number that we have was based on the research that we have done using public notices, obituaries, words from friends or acquaintances who have known these nurses.”

With recent developments in a resurgence of the virus in several states, Cortez believes the number will only go up.

“It’s even going to get worse, as we head on to another surge with the schools reopening and with the flu season coming in the fall, it will just exacerbate the number.”

Nurses who were present at the event demanded Congress enact the HEROES Act, “which will fully invoke the Defense Production Act to mass produce personal protective equipment, and will also create an emergency temporary standard to protect essential workers on the front lines of this deadly pandemic” according to National Nurse Magazine.

“First of all, as a nurse, we are concerned with the health of the public,” Cortez said. “So, one of the provisions of the HEROES Act is the extension of health care for a lot of people. Because we all know that a majority of the people, their healthcare is tied with their employment. Because of being furloughed or being laid off, a lot of them has lost their healthcare. So the HEROES Act would extend the healthcare coverage of a majority of the people who have lost it.”

Cortez went on to explain the need for a coordinator of supplies, including desperately needed personal protective equipment (PPE).

“That person knows and will have a tracking method as to where the supplies are going or where they have gone and then, it will require that the president fully invoke the Defense Production Act, which will require local manufacturers to ramp up the availability and the production of PPE, which is so badly needed.”

To that end, the PPE that is available to nurses, is sometimes “locked up in some manager’s office,” according to Cortez.

“It will help that this federal agency would require employers to have the adequate and optimum PPE for the nurses and that would prevent managers in the hospital industry from hoarding supplies.”

The personal protective gear that was in dangerously short supply during the early weeks of the coronavirus crisis in the U.S. began running low again as the virus resumes its rapid spread and the number of hospitalized patients climbs.

“We’re five months into this and there are still shortages of gowns, hair covers, shoe covers, masks, N95 masks,” said Deborah Burger, president of National Nurses United, who cited results from a survey of the union's members. "They’re being doled out, and we’re still being told to reuse them.”

When the crisis first exploded in March and April in hot spots such as New York City, the situation was so desperate that nurses turned plastic garbage bags into protective gowns. The lack of equipment forced states and hospitals to compete against each other, the federal government and other countries in desperate, expensive bidding wars.

In general, supplies of protective gear are more robust now, and many states and major hospital chains say they are in better shape. But medical professionals and some lawmakers have cast doubt on those improvements as shortages begin to reappear.

Cortez also outlined how, as of right now, there is no comprehensive guidance as to how to protect health care workers who are on the front lines during the pandemic.

“It’s asking OSHA (Occupational Safety and Health Administration), to issue a temporary emergency guidance to say that we, as front line health workers, need to be protected because right now, we don’t have anything. There’s no guidance,” Cortez said.

The U.S. Centers for Disease Control and Prevention does, however, have interim guidelines for how health care personnel should protect themselves should they be exposed to COVID-19 while on the job.The guidelines recommend personal protective equipment for workers who will be interacting with patients who have tested positive for COVID-19, as well as decontamination methods to preserve PPE in case there is a shortage, both of which the union has voiced concerns over.

And when and if a health care professional contracts the virus, CDC guidance recommends that the employee get tested immediately and if tested positive, be excused from work for 14 days, according to the agency. Workers who have tested positive should also notify their employer immediately, the CDC says.

Hospitals have resorted to decontaminating PPE to reuse as a response to the strained supply at the onset of the COVID-19 pandemic, but NNU believes the practices are not sufficient in protecting nurses from contracting the virus.

Cortez mentioned the downfalls of decontaminating what little PPE that’s been made available to health care staff around the country.

“They started to have us recycle our N95s, also known as the respirator masks, by telling us to put our employee numbers on the mask and put it in a bin so that they can run it through a decontamination process,” Cortez said. “A process which would be requiring a lot of chemicals to kill or to eliminate whatever virus or germs that mask has accumulated during your shift.”

According to Cortez, it’s because chemicals are being inhaled throughout the entirety of a worker’s shift — chemicals that came from the decontamination process. It’s just another concern on a long list of worries for nurses, Cortez said.

“Six months, seven months on, so, at the very beginning in the spring, when the pandemic first hit, our hospitals were not prepared at all,” Cortez said, with frustration in her tone.

“Someone would think that having gone through the Ebola crisis a few years ago, our hospitals and the whole hospital industry should be prepared for anything of this magnitude, but lo and behold, they were not.”

Cortez emphasized how health care workers had asked for PPE from the onset of the pandemic.

“Nurses continue to risk their lives and a lot of our nurses have died, and so have front-line health care workers,” she said.

“We are at war, and our enemy is COVID-19,” said Maria Lobifaro, who has been a registered nurse for 10 years. “I am not scared to go to war. I am ready, my spirit is strong, but I can’t go to war without my version of gear.”

Lobifaro was present during the demonstration at the White House, according to National Nurse Magazine, and made it clear that herself, as well as her colleagues, feel taken for granted as they continue to fight this deadly virus.

“I will go in to care for a COVID patient with a bandana when the head of the CDC comes in with me,” Lobifaro told National Nurse Magazine.

Cortez also mentioned how there is no cohesive policy regarding how positive COVID-19 cases among healthcare staff are reported to hospitals.

“They won’t even notify you if you were exposed,” she said. “If you had a possible exposure, there is no way that you would be able to know that again, except for the person who was exposed, himself or herself, telling the colleagues that, hey you know, you might want to be tested because I was exposed and I tested positive.”

“So, the hospital is not obligated. There is no policy to make it known whether one of their employees contracted the virus or has become positive,” Cortez said. 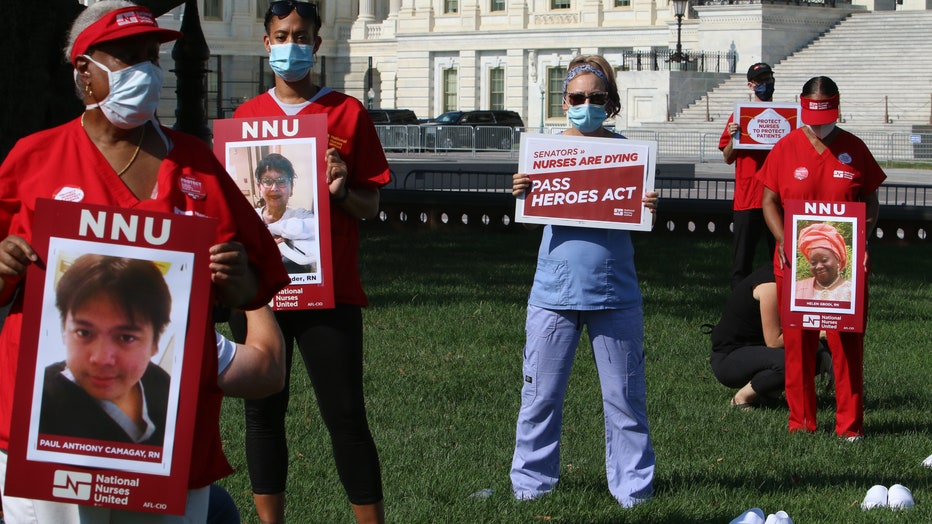 “I’ve had acquaintances and some old friends who have succumbed to COVID-19, and you know, to this day, the families are still devastated because, if only, if only we had the PPE at the very beginning, all these deaths would not have happened,” she said.

“As a nurse and a front line health care worker, and I think I would be speaking on a lot of nurses and a lot of health care workers,” Cortez said. “To the federal government, to people in power, to those in our regulatory agencies, please do whatever you can to protect us, because in the long run, if we all die, there will be nobody left to take care of the patients and the public. So please, give us what we need, give us the protection, give us a safer environment because if we are safe, everybody else will be safe.”

The Associated Press Contributed to this report.