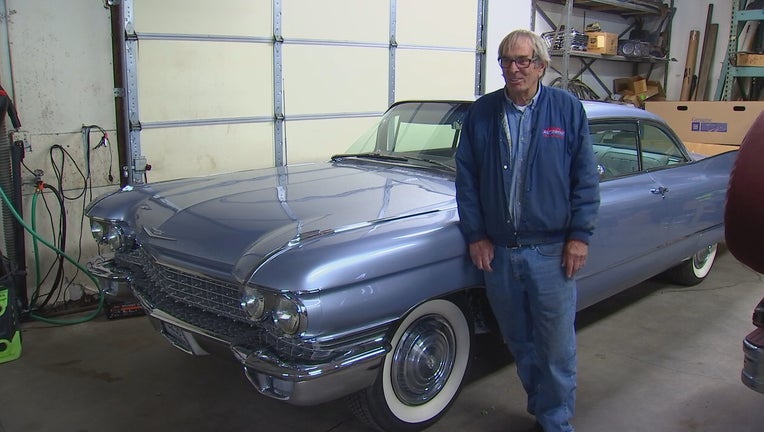 St. Paul car enthusiast John Ritter is hoping to get his classic cars back after two more were stolen - just after six other stolen cars were recovered.

ST. PAUL, Minn. (FOX 9) - A classic car lover who had six of his vehicles stolen is once again the victim of a car theft. All of those six cars were recovered last week, but then someone took two more of his cars over the weekend.

Just after six stolen cars were recovered, two more were stolen from an auto shop in St. Paul, Minnesota.

John Ritter is grateful to have to his 1960 Cadillac Coupe DeVille back where it belongs. But now, two more of his classic cars are gone.

"It was really more devastating than the first time because it gets really tiring - so much time and a lot of money," he said.

Back on Sept. 27, someone broke into Ritter's body shop just off West 7th Avenue in St. Paul and made off with six vintage vehicles worth more than $300,000.

By the end of the week, police had recovered all six of them. One of them, the ‘65 Pontiac LeMans, had some damage to its rear end.

But, Ritter said early Sunday morning, someone broke into his building again and stole two more of his prized possessions, including a 2001 Pontiac Firehawk.

Ritter said surveillance video from a nearby business shows the suspects driving off in the stolen cars.

“It isn't someone who is stealing them for profit. They're just not behaving, that’s all. They're just bad people who don't understand what they are doing."

Ritter said police have already found the ‘65 Chevy Impala that was taken on Sunday, and he hopes the Firehawk - which is one of only 500 made that year - won't be far behind.

Ritter said he is beefing up his security system and moving some of the cars to another location. Police haven't made any arrests in either burglary.