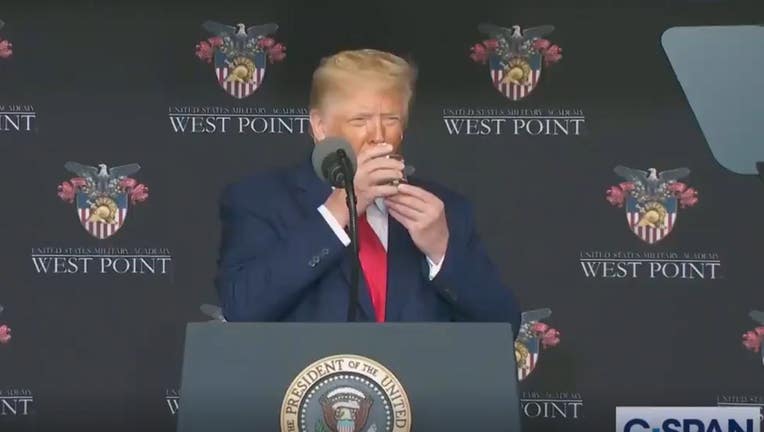 President Donald Trump needed two hands to drink a glass of water during a speech at West Point on Saturday.

President Donald Trump was on the defensive after videos showing him walking carefully down a ramp and using two hands to hold a water glass gained traction on social media.

The videos were both from CSPAN's coverage of Trump's commencement speech at West Point on Saturday.

In one clip, Trump, 74, lifts a water glass to his mouth with his right hand, which seems to stall out. He uses his left hand underneath the glass to bring it to his lips.

In the other clip, Trump walks down a ramp with Lt. Gen. Darryl A. Williams. For most of the walk, Trump keeps his eyes on his feet and walks slowly.

Late Saturday night, Trump tweeted: "The ramp that I descended after my West Point Commencement speech was very long & steep, had no handrail and, most importantly, was very slippery. The last thing I was going to do is “fall” for the Fake News to have fun with. Final ten feet I ran down to level ground. Momentum!"

The video clearly shows that the president did not run the "final ten feet" down to ground level. The video shows Trump walking at a more normal speed for the last three or four steps.

Some doctors and political commentators on Twitter noted that healthy people do not generally need two hands to drink a glass of water, and the hashtag #TrumpIsNotWell was trending Saturday night.

John Dean, who served as President Richard Nixon's White House counsel, wrote on Twitter, "Trump’s West Point speech showed a man who is physically and mentally impaired. Drinking water should not take two hands unless you are hiding a tremor. Trump’s delivery was halting, at times slurred. And his departure down a slight ramp revealed he needed a walker or golf cart."

The state of President Trump's health has been the subject of speculation since he was abruptly taken to Walter Reed in mid-November. At the time, the White House said he was doing part of his annual physical early. The White House continues to insist Trump is extremely healthy for his age.