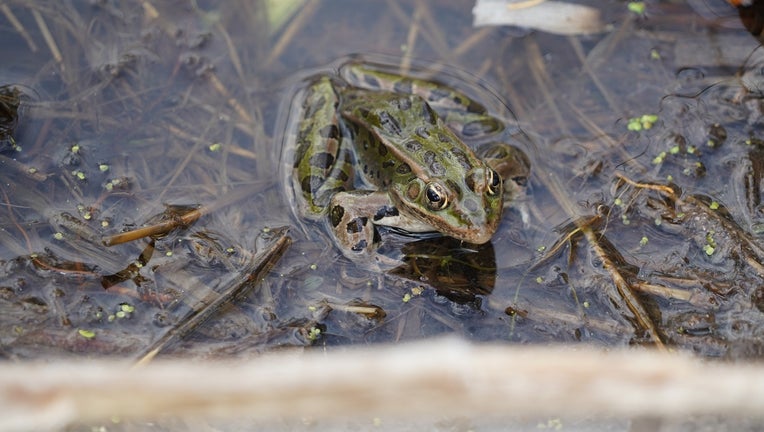 HENDERSON, Minn. (FOX 9) - It was a simple school field trip that led to an ecological mystery lasting more than 25 years.

On a July afternoon in 1995, Cindy Reinitz took her students from the Minnesota New Country School in Henderson to the Ney Nature Center.

What happened to the mysterious deformed frogs of Minnesota

The FOX 9 Investigators look into the mystery of the deformed frogs of Minnesota that first came up 25 years ago.

"Little did we know we’d have a lesson that went on for years," Reinitz said recently.

The 7th graders discovered grotesquely deformed Northern Leopard Frogs at the Ney Pond, with extra legs, missing legs, or no legs at all.

"Our brains went ‘Oh, what is this?" recalled Reta Lind, one of the students on the field trip that day.

"It wasn’t anything gross, it was more like, ‘This is strange. I want to see what is going on,’" Lind said.

The students began collecting data on the different kinds of frog deformities they found.

Their discovery that day would set off a media whirlwind and launch an entire field of ecological research as clusters of deformed frogs were discovered throughout Minnesota, and around the world.

The FOX 9 Investigators wanted to know if scientists ever developed a viable theory for what caused the frog deformities.

"It became so widespread and stuff was coming in from all over the country," said Judy Helgen, who at the time was a research scientist for the Minnesota Pollution Control Agency (MPCA) studying the biological diversity of wetlands.

Under normal circumstances, the rate of frog abnormalities might run between zero and less than five percent.

This wasn’t normal.  Over the next couple of years, clusters of deformed frogs would be discovered throughout the U.S. and on every continent except Antarctica.

In Minnesota, deformed frogs were found at 172 locations, in 54 of 87 counties, across seven different frog species.  The rate of abnormalities in some hot spots as high as 67 percent.

The public became even more alarmed when a federal study showed nearby well water could cause the same kind of frog deformities in a laboratory.

"It’s not just a belief," said Helgen.  "It was something in the water."

Helgen led the MPCA’s investigation into frog deformities until funding was cut off in 2001.  After several years of research among state and federal agencies, there was no scientific consensus.

"We weren’t really able to get an answer," Helgen said.

A spokesperson for the MPCA told the FOX 9 Investigators that while they still get a couple of residential reports of deformed frogs each year, "We have not formally researched abnormal frogs for more than 20 years." 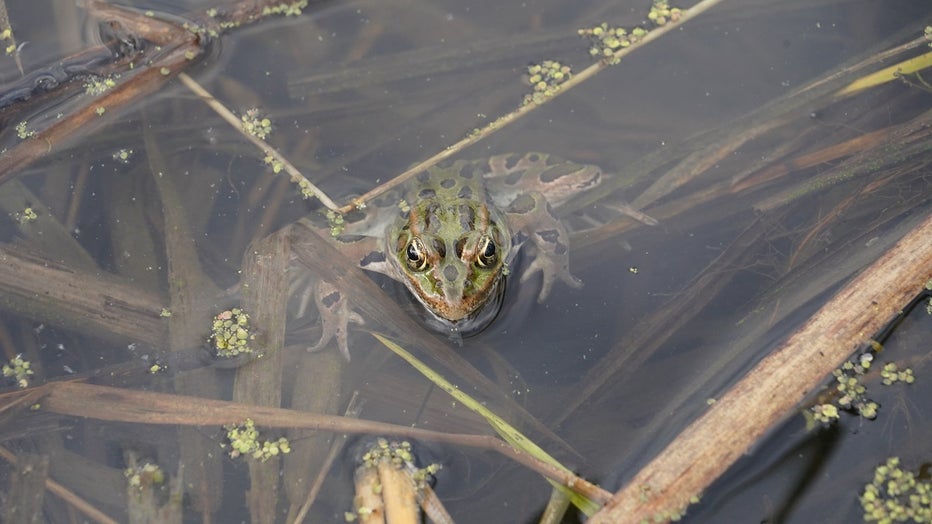 University of Minnesota biologist Robert McKinnell knew the Northern Leopard Frog better than anyone, having studied it since 1958 for breakthroughs in cloning, genetics, and cancer research.

"People were always laughing, ‘What’s up with the frog story?’ I said, ‘Don’t laugh, it could happen to us,’" said McKinnell, 95, who is now retired.

McKinnell discovered the deformed frogs were just as deformed on the inside, their internal organs and reproductive systems were a mess.  Some deformed frogs had food in their bladder, and their testes were translucent.

"Those kids weren’t making it up.  Those abnormalities were real and they were abundant.  So, something was wrong," McKinnell said.

Over the years, scientists leapfrogged from one potential cause to another. Scientists working for the federal government in Duluth thought ultra-violet radiation from a depleted ozone could be damaging fertilized eggs on the pond surface. There have been studies that focused on the presence of various heavy metals, insecticides, and farm chemicals.

Other researchers thought a parasite found in snails could be attacking the limbs of tadpole embryos, and that became a leading theory.

Dr. Pietr Johnson studies what he calls "the dark side" of biology at his lab at the University of Colorado-Boulder, which includes the parasite Ribeiroia.  Its life cycle takes it from pond snails, to tadpoles and frogs, and eventually, to birds.

"Deformed frogs are really easy for birds to get; they’re like popcorn," Johnson said.

Johnson, who has done field research in Minnesota, believes parasites are a "pretty big part of the explanation" for deformed frogs. "Do they explain it all?  Obviously not," he said.

Pesticides and fertilizers could be working synergistically with Ribeiroia by weakening frogs’ immune system, he said, or by creating a hospitable environment for parasites.

"The idea that its either predators, or parasites, or pesticides, is a rather simplistic way of thinking about complex ecological problems," said Johnson.

Helgen and other researchers have been skeptical about the parasite theory.  They argue that parasites are extremely common in frogs and that while it might explain limb deformities, parasites couldn’t account for the wide array of other abnormalities.

The Ney Nature Center is surrounded by farm fields with four tiled drains that empty into the pond.

Lab testing at the pond in the late 1990s confirmed the presence of herbicides like glyphosate, atrazine, and acetochlor.  The chemicals are known as endocrine disruptors.

Helgen wanted to know precisely what chemicals the nearby farms were using and in what quantities. But, she said she was told by the Minnesota Agriculture Department that even the use of "restricted" chemicals on farmland wasn’t considered public data, not even for scientists.

Helgen said there are hundreds of farm chemicals with no regulatory standards.  There’s not even a framework for interpreting the data, she said.

After she retired from the MPCA, Helgen wrote "Peril in the Ponds," which documents her struggle to find answers and the bureaucratic infighting among state agencies.

Prof. Tyrone Hayes, a researcher at UC Berkeley, discovered a link between atrazine and feminized male frogs.  The chemical industry reportedly targeted Hayes in an effort to discredit his research.

Canary in the Coal Mine

If answers remain elusive, that should come as no surprise given the rigors of the scientific method and difficulties of longitudinal research. It is still unknown what causes 50-to-75 percent of all birth defects in humans.

Frogs are an indicator species, a so-called ‘Canary in the Coal Mine,’ their fate a potential indicator of human health risks.  The frog thyroid system is very similar to humans.

"I tend to think its chemicals and it could be a complex mix.  I’ll tell you this, I wouldn’t drink water from that pond, especially if I was going to have kids," McKinnell said.

In the end, there were plenty of correlations, but no definitive causal agent identified for the wide variety of frog deformities, across different species, and environments.

"I think the answer is everything," said Dr. Martin Ouellet with a chuckle.  In the late 1990s, the Canadian researcher was trying to crack the same puzzle, as deformed frogs began appearing near farmland in Quebec.

Ouellet discovered a possible link between DNA damage and pesticides in deformed frogs.  He also believes predators and parasites are possibilities.

But Ouellet said there is a bigger picture to the story of deformed frogs:  The dramatic loss of naturally occurring wetland habitats. 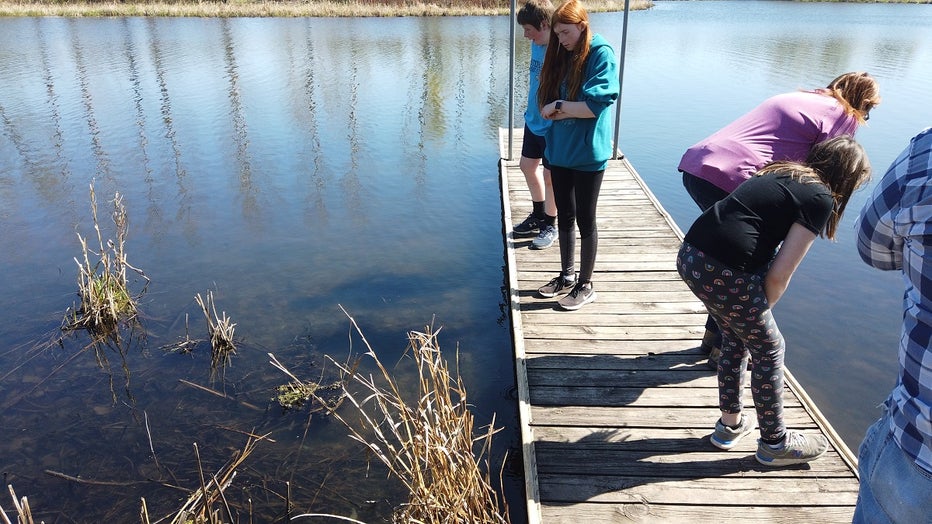 "The marsh and pond habitat for frogs is disappearing and for us that is why we are focusing on loss of habitat and that is the problem number one," Ouellet said.

Minnesota has lost half its original wetlands to a combination of tiled farmland and encroaching suburbia.

"I can tell you where I used to collect frogs, there are no frogs," said McKinnell, who has been collecting the Northern Leopard Frog for 64 years.

Today there are also entire families of chemicals people didn’t even talk about it the 1990s, like neonicotinoids, which have been blamed for declining bee and monarch butterfly populations.

Helgen continues to study and write about wetlands, especially her beloved invertebrates.  While at the MPCA she developed a method for measuring the diversity of invertebrates as an indicator of the environmental health of wetlands.

And at the Minnesota New Country School in Henderson, the five-legged frog has become the school’s mascot.

Reinitz, the teacher once referred to as ‘The Frog Lady,’ still takes students to the Ney Pond.

"I continue to follow what is going on, but it has gone way above a bunch of Minnesota school kids," she said.  "It’s gone worldwide."