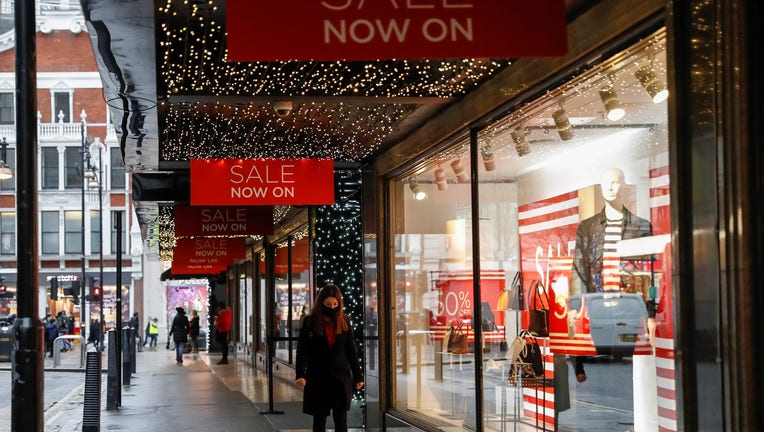 A woman wearing a face mask walks past John Lewis on Oxford Street in London, United Kingdom, on Dec. 18, 2020. (Photo by Han Yan/Xinhua via Getty)

U.K. Prime Minister Boris Johnson on Saturday imposed a new round of restrictions for London and much of southern England after officials said they have identified a new COVID-19 strain that can spread more quickly and is believed to be linked to a rise in infections across those areas.

Johnson said that the capital and other areas in southern England currently under Tier 3 -- the highest level of coronavirus restrictions -- will move to an even stricter new Tier 4 that requires non-essential shops, hairdressers and indoor leisure venues to close after the end of business hours Saturday.

"I know how much emotion people invest in this time of year, and how important it is, for instance, for grandparents to see their grandchildren, for families to be together," Johnson said. "But we have said throughout this pandemic that we must and will be guided by the science."

Pharmacists in the U.S. are finding extra doses of Pfizer-BioNtechs COVID-19 vaccine in the distributed vials, potentially expanding the country’s short supply.

The announcement comes a day after the country reported more than 28,500 new COVID-19 cases, with nearly 500 deaths. The latest official figures showed infections climbing across the U.K., with a sharp increase in London. The percentage of people testing positive over the past week rose in England, Wales, Scotland and Northern Ireland, according to data released Friday by the Office of National Statistics.

Mike Ryan, chief of the World Health Organization’s emergency program, said Monday that the WHO was aware of a genetic variant of COVID-19 reported in about 1,000 individuals in England.

"Authorities in the U.K. are looking at its significance. We have seen many variants -- this virus evolves and changes over time," he said.

England’s chief medical officer, Chris Whitty, told Reuters on Saturday that it was too early to tell whether the new strain caused a higher mortality rate or impacted vaccines.

"We have alerted the World Health Organization and are continuing to analyze the available data to improve our understanding," he said.

Officials moved this week to tighten up the existing restrictions for much of the population by putting large parts of southern England into the highest virus alert level, Tier 3.

"We're hoping very much that we will be able to avoid anything like that," Johnson said during a visit to Manchester. "But the reality is that the rates of infection have increased very much in the last few weeks."

One expert was skeptical about the effectiveness of the U.K. government's three-tiered system of restrictions.

"At the moment it doesn't look like the tier system is holding the epidemic wave back, unfortunately," John Edmunds, a member of the government's Sage scientific advisory panel, told Sky News. "So I think we are going to have to look at these measures and perhaps tighten them up" after Christmas, said Edmunds, a professor at the London School of Hygiene and Tropical Medicine.