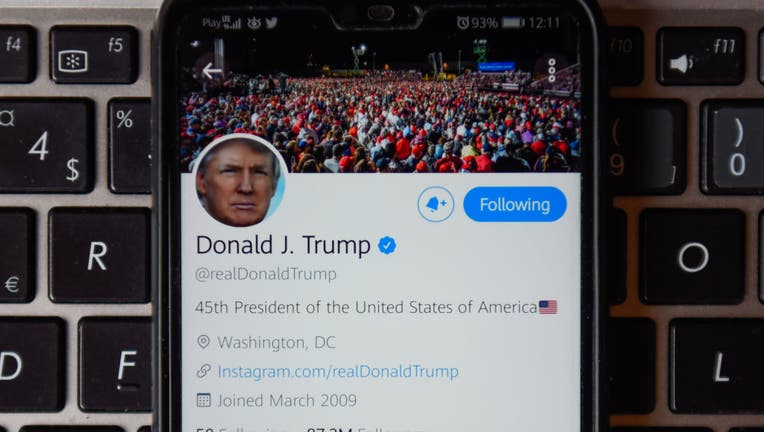 FILE - In this photo illustration a Donald Trump twitter account seen displayed on a smartphone with a laptop keyboard on the background. (Omar Marques/SOPA Images/LightRocket via Getty Images)

LOS ANGELES - The @POTUS Twitter account will automatically be given to President-elect Joe Biden on Inauguration Day, according to the company.

Twitter is working with the National Archives and Records Administration to transition all Twitter accounts associated with the presidency including @FLOTUS, @VP, and @whitehouse once Biden is sworn into office.

“Twitter is actively preparing to support the transition of White House institutional Twitter accounts on January 20th, 2021. As we did for the presidential transition in 2017, this process is being done in close consultation with the National Archives and Records Administration,” the company said in an emailed statement.

President Donald Trump’s tweets will be shifted to an archived account, just as President Barack Obama’s tweets were transitioned to @POTUS44 when he left office in 2017, according to Twitter.

“Social media accounts created or used for official agency business must stay under the control of the agency. When an employee uses a personal social media account to communicate with the public on behalf of the agency, they may be creating Federal records that must be brought under records management control and managed. It may be necessary for the account to become the property of the agency,” according to the National Archives and Records Administration.

The transition of social media accounts to a new administration is arguably the least of Biden's worries as the current president's refusal to cooperate with his successor is forcing Biden to seek unusual workarounds to prepare for the exploding public health threat and evolving national security challenges he will inherit in just nine weeks.

Blocked from the official intelligence briefing traditionally afforded to incoming presidents, Biden gathered virtually on Tuesday with a collection of intelligence, defense, and diplomatic experts. None of the experts is currently affiliated with the U.S. government, raising questions about whether Biden is being provided the most up-to-date information about dangers facing the nation.