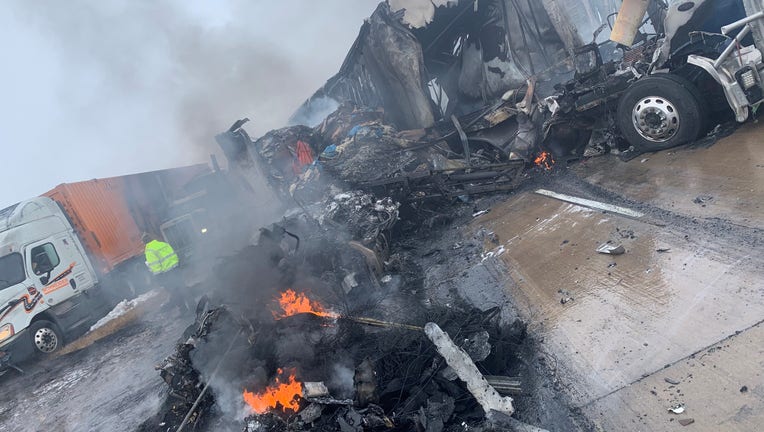 I-94 near Monticello, Minnesota was shut down for hours after 29 vehicles crashed on a snowy Thursday morning. (James Trantina)

MONTICELLO, Minn. (FOX 9) - After dozens of vehicles crashed on I-94 near Monticello, Minnesota Thursday morning, it took hours to clean up the fiery mess.

James Trantina, who owns a towing and large debris removal company in central Minnesota, said it was the worst crash he's ever dealt with. He explained nothing could have prepared him and his crews for what they came upon that day.

After dozens of vehicles crashed on I-94 near Monticello, Minnesota Thursday morning, it took hours to clean up the fiery mess.

“It was a crazy feeling,” he said. “Unbelievable. When I showed up on scene, your heart just sunk. It was something out of a movie. Everything was on fire. The freeway is shut down.”

The State Patrol reported a total of 29 vehicles were involved in a massive pileup, half of them semis. Officials blamed a snow squall for poor visibility and difficult driving conditions that had cars and trucks crashing on top of one another.

Trantina recalled there were flames up and down the chaotic scene as they worked for hours to open up the interstate.

“Even when pulling the semis apart and the cars apart, there were explosions with shrapnel in the air,” said Trantina. "Obviously, we were all in danger.”

Crews fought fires on semis Thursday after a 29-car crash in snowy, low-visiblity conditions on I-94 near Monticello. (JoseLuis Acuna Del Valle)

Nine people were transported to area hospitals with minor injuries. Miraculously, no one was killed. Trantina joined the team that had to go through the wreckage carefully to make sure everyone had gotten out.

Trantina explained the pileup required all the resources his various companies could muster including heavy-duty trucks from Collins Brothers Towing of Saint Cloud and Burda’s Towing. He figures he had more than 30 people on scene as well as excavators, skid loaders, and a pair of large rotator tow trucks.

Dale Tuenge was one of the lucky ones. FOX 9 caught up with Tuenge as he picked up his belongings at Trantina’s operations headquarters not far from the scene of the pileup. Burned out wreckage now sits throughout the lot.

A day later, Tuenge says he is just grateful to be alive, figuring he was struck five or six times after the initial impact before he was able to exit his car safely in whiteout conditions.

“I stood out there and watched a semi burn,” he said. “It was a spectacle. I’m glad I made it through alright.”