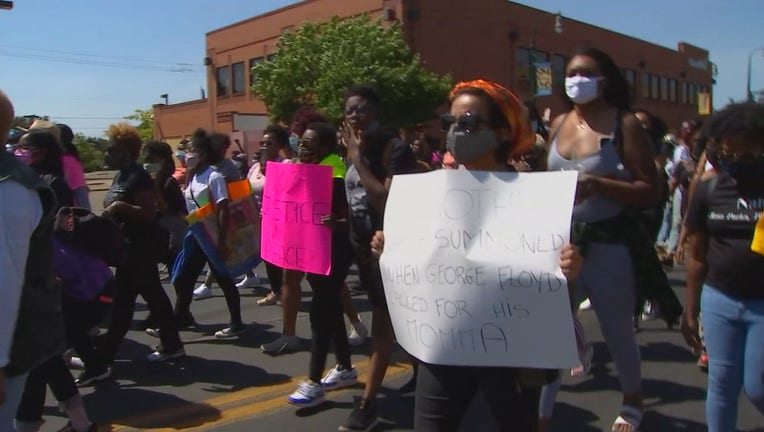 The Mother's March in Minneapolis brought together women who are demanding change after the death of George Floyd.

MINNEAPOLIS (FOX 9) - Women and families of color marched two and a half miles Sunday to demand change.

“It breaks my heart,” said Lisa Dunlap, of Andover. “These are our men. This is who my daughters could be choosing from.”

Women and families of color marched two and a half miles Sunday to demand change.

The Mother’s March concluded at the place where George Floyd called out for his own mother, moments before his death.

“Even as an adult, I’m 31, when I feel depleted or I have nothing left, even as a mother, I call on my mom,” said Nikkia Hines, of St. Louis Park.

Hearing Floyd breathlessly call for his “mama” in the video that has now been seen around the world is what called mothers everywhere to action.

“His mother had already passed and that was his last straw,” said Hines. “That part. I can’t…I can’t verbalize how I feel.”

While there was a lot of heartache at the march, there was also overwhelming hope that the march could have the potential to ignite real change.

“He laid his life down for a change,” said Sandie French, who has four children and 13 grandchildren. “God led him to Minnesota for a change.”

“We can’t live separately,” said Dunlap. “There’s only one boat and we’re all in this one boat together. So all of our children grow up and have the best opportunity we all need to thrive. Everybody’s life needs to be valued.”