On Wednesday night’s finale, the first contestant to be revealed was Cheyenne Jackson, known as Prince on the show.

LOS ANGELES - The seventh season of "The Masked Singer" came to an exciting and shocking close Wednesday evening, revealing its final three contestants and the winner of the Golden Mask trophy: Teyana Taylor, known as Firefly.

The competition was narrowed down to three finalists — Prince, Ringmaster and Firefly — all of whom represent Team Good.

Prince revealed on "The Masked Singer"

On Wednesday night’s finale, the first contestant forced to "take it off" and be revealed was Prince — who judges this season were convinced was a professional singer.

Prince was revealed as Emmy and Grammy-nominated actor and singer Cheyenne Jackson, known for leading roles in Broadway musicals, as well as television roles including FOX’s "Call Me Kat," "30 Rock" and "Glee."

Jackson told FOX Television Stations that "The Masked Singer" allowed him the opportunity to merge his love for singing and performing on television. 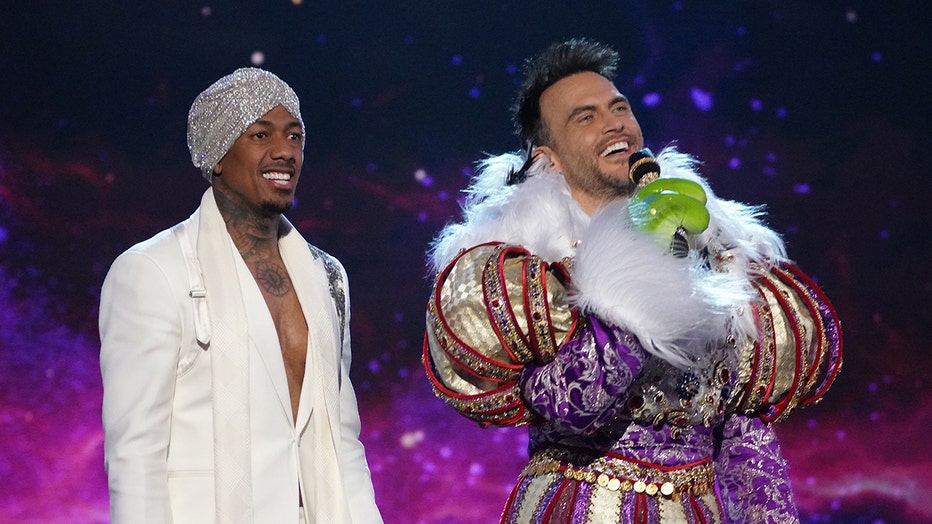 "That’s exactly why I did it," Jackson shared. "Broadway was my first love and it’s kind of what launched me into this life as an artist."

He continued, "I was on the television show ‘Glee’ and I didn’t get to sing, so this was a really great opportunity to share that side of myself and also reignite my love of live music."

Jackson, 46, said his two children knew "the whole time" that he was the celebrity behind the frog costume.

The competition was narrowed down to three finalists, Prince, Ringmaster and Firefly, all of whom represent Team Good. (Credit: Michael Becker / FOX)

"They were a little bit sad I didn’t win," he continued. "But, that’s what I teach them in life: sometimes you win and sometimes you lose, and you move on and you take what you can from the experience. I think it’s important for them to see me try something that’s new — put myself out there — and hopefully, they can implement that in their lives."

He added, "I went up a couple of cool factors now."

Advice for future celebrities on ‘The Masked Singer’

Throughout the competition, Jackson said he utilized the advice of Grammy-nominated singer and songwriter Jewel, who was crowned the winner of the Golden Mask last season.

RELATED: Jewel struggled to see through Queen of Hearts mask in The Masked Singer

What Cheyenne Jackson learned on ‘The Masked Singer’

Jackson revealed he decided to be a part of the seventh season as somewhat of an "experiment."

"My whole life in the arts, people take one look at you and they think they know who you are by what you look like. So I thought, what a fun experiment to not have people see my face or body and place whatever preconceived notions they have about you on you," he revealed. "What if you couldn’t see me and I could be whoever I wanted to be and only connect with you through my voice and through the lyrics that I’m singing."

He continued, "It ended up being a very moving and profound experience. What I learned is that I love to sing and I need to do more of it and more songwriting."

Jackson shared he wants to continue to write music for television and films and will focus on that in the coming years.

But "The Masked Singer" isn't the only FOX show keeping Jackson busy as an actor and songwriter.

Jackson also stars in Mayim Bialik’s "Call Me Kat," which was renewed for a third season Monday. He shared that the show has been licensing some of his music for episodes.

After a long supporting role on the hit show, The Big Bang Theory, Bialik returns to the TV screen starring as a woman who struggles every day against society to prove that she can still live a happy and fulfilling life.

"It’s been maybe my favorite job ever," Jackson, who plays Max in the comedy series, revealed. "It is a gift and I am grateful because I get to create comedy and create some positivity in a world right now in which, frankly, we can use it, and so to be a part of that is wonderful."

The show premiered its first season in January 2021 as part of FOX’s midseason lineup and debuted its second season this January.

Bottom line: Jackson said "The Masked Singer" taught him that he can incorporate both music and acting into his career going forward.

"The show taught me that I can do both. I can be Max on a TV show, but I can also be Cheyenne the singer-songwriter, and I really want to focus on my music more."

"The Masked Singer" is a top-secret singing competition in which celebrities face off against each other and appear in elaborate costumes with full face masks to conceal their identities.

The singers may attempt to throw off the crowd, but keen observers might pick up on tiny clues buried throughout the show. Each week, a singer is eliminated – and then reveals his or her true identity.

Can't wait for next season? "The Masked Singer" is hitting the road!

Natasha Bedingfield, formerly known as Pepper on Season 6, will host a 50—city North American tour, kicking off May 28. Tickets are on sale at TheMaskedSingerTour.com.

Get to know "The Masked Singer" with these essential episodes, streaming free on Tubi

Season 4, episode 10 — "The Semi Finals – The Super Six": Eventual season-winner Sun (no spoilers!) delivered a number of top-notch performances, but her version of Billie Eilish’s "When the Party’s Over" might be not only her best of the season, but the best of the fourth season and one of the greatest in the show’s history. Mushroom’s rendition of the Amy Winehouse song "Valerie" ain’t half bad either.

Season 5, episode 1 — "Season 5 Premiere - Return of the Masks": Better remembered as the episode where (okay, a little spoiler follows, scroll past if you don’t want to know) ... (seriously, look away) ... (last warning) ... Kermit the Frog was revealed to be the Snail. Kermit the Frog! A fictional, non-human character! Also definitely the most famous celebrity to ever appear on the show! That was a wild one.

Season 3, episode 10 — "The Super Nine Masked Singer Special: Groups A, B & C": It’s important to remember that this episode aired on April 1, 2020. There was a lot going on that month! So while most April Fools Day jokes are indisputably lame, the one Astronaut pulled — "Rickrolling" America with a legitimately great rendition of Rick Astley’s "Never Gonna Give You Up" — was undeniably welcome.

Season 1, episode 8 — "Semi Finals: Double Unmasking": The double-unmasking is exciting, sure, but this episode is best remembered as the time Monster sang Sam Smith’s "Stay With Me," another contender for the best performance in the show’s history. Seriously, just listen to this.

Season 1, episode 1 — "Season Premiere: Mask On Face Off": Here’s where the madness begins, but as with any truly great episode of this madcap series, it’s one single performance that stands out. In the U.S. series premiere, the performance also happened to be the first performance. Peacock’s rendition of "The Greatest Show" from the Hugh Jackman movie musical "The Greatest Showman" was, appropriately enough, a show-stopper, and it set the bar high.

This station and Tubi are owned by FOX Corporation.