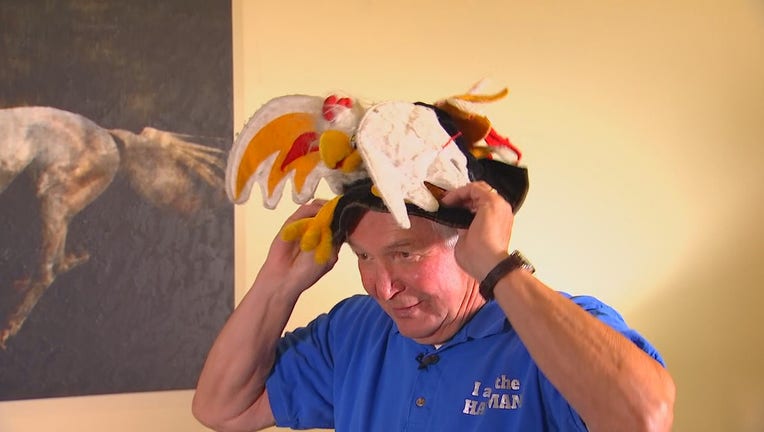 His Apple Valley neighbors know him as The Hat Man because of his 250-piece hat collection that skews toward the strange.

APPLE VALLEY, Minn. (FOX 9) - An Apple Valley man’s colorful collection of crazy caps he wears when he leaves the house is bringing some smiles and laughter to his community.

Steve Hylbak is a husband and a grandfather, but his neighbors know him as the Hat Man.

“Most people don’t know my name, they just call me the Hat Man,” Hylbak said.

He has a hat for every occasion in his collection of 250 hats. He wears them almost everywhere he goes.

Hylbak has always had a thing for hats, but after he married his high school sweetheart, they moved from Minnetonka to a suburb of Denver, Colorado in the early 1980s. A short time after, Hylbak suffered a ruptured brain aneurysm while opening presents on Christmas Eve.

He woke up in the hospital 11 days later paralyzed and blind in one eye, but doctors told his wife it was a miracle he survived at all.

Nearly 40 years later, Hylbak still has problems with his short-term memory. He writes notes to himself to remind him what to do every day. But the fact that his family fade it through the ordeal intact is his reason for spreading some joy around his community when he can.

Hylbak buys some of his hats, but most of them are gifts to feed his seemingly unending appetite for the silly and outrageous.

He wears them all when he reads to kids at nearby schools, too.

“Steve just exudes joy,” said his neighbor Elizabeth Hanf. “He has a really friendly face and he makes everybody smile and it’s really lovely to have someone like him in the community.”

From the young to the young at heart, Hylbak’s hobby is a feather in his cap. While his hobby appears silly, he has a message to share that he hopes will never become old hat.